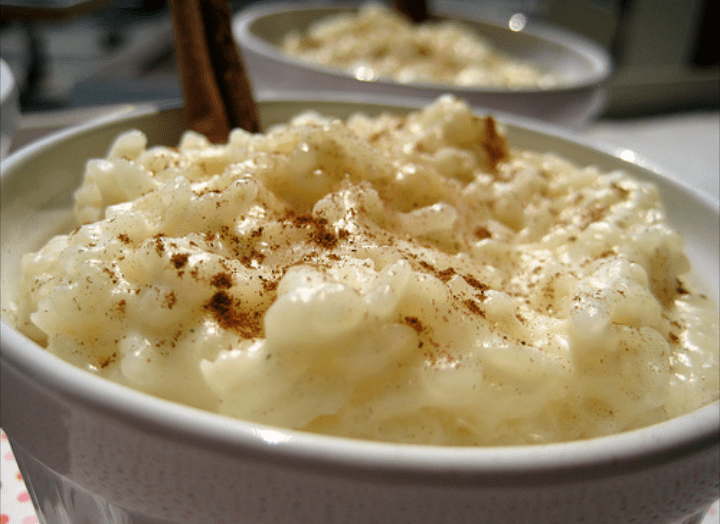 Arroz con Leche, or the literal translation “rice with milk,” is a widely popular dish amongst Hispanic countries. However, there is much debate regarding the origins of this dish. In year 711, a group of people of mixed Arab, Spanish and Amazigh (or Berber) origins, also known as the Moors, swarmed into Spain and parts of France. The Moors occupied this space until the end of the 15th century, and it is believed that their traditional Arabic cuisine is the Arroz con Leche origin birthplace. During the Age of Exploration, which occurred between the 1400s and the 1600s, this recipe was brought not only to Spain but also to South America, where the recipe took on endless variations.

The original Arroz con Leche recipe consisted of only cinnamon and rice- cooked by gathering all ingredients together in a pot, stirring while it simmers, and letting it cook until a velvety texture is obtained. However, due to its exposure to multiple countries and cultures, numerous variations of this dish materialized due to its easily accessible ingredients, large batches, and simple recipe.

So, how do I make a rice pudding dish?

The making of a traditional rice pudding dish is effortless and straightforward. A list of the ingredients and steps to make this simple yet delicious dish for your loved ones follows.

Add the 6 cups of milk, ½ cup of sugar, and ½ teaspoon of salt together and mix well in a large saucepan. Bring to a boil on medium heat.

Slowly stir in the ½ cup of long grain rice, reducing the heat to low. Bring to a gentle simmer on low to medium heat.

Stir the rice gently and consistently for 50-60 minutes until it reaches a creamy texture.

Once your mixture has reached a consistency similar to yogurt, remove it from the heat.

Before serving, stir in the last ½ cup of milk.

Optional: sprinkle a dash of ground cinnamon on top.

If you are in the mood for a little more flavor or a fun twist, listed below are a variety of rice pudding dishes and their corresponding cultural origins.

The main difference between the Spanish Arroz con Leche and the original recipe is the addition of a lemon or orange peel for a unique zesty twist.

Pro tip: Avoid the white pith of the lemon or orange, as it has a bitter taste.

This recipe is set apart from the previous two recipes due to the addition of additional spices and evaporated and sweetened condensed milk. Evaporated milk is used because it is a common ingredient in Peru, while whole milk can be challenging to find. The addition of cloves (typically 4-5 per batch) adds another delectable flavor to this sweet treat.

Creating this recipe involves an extra step before blending and mixing the ingredients. The Cuban culture believes the secret ingredient to a mouthwatering batch of rice pudding requires soaking the rice for a minimum of two hours before mixing and boiling it with additional ingredients. This ensures that the rice will be nice and tender for your guests.

Like the Cuban rice pudding dish, Columbians also apply their own twist to the traditional recipe by attaining an extra creamy, almost velvety texture comparable to pudding than yogurt.

Overall, there is an assortment of rice pudding dishes and recipes available to you depending on your culture, palette, or preferences- one just as tasty as the next. Arroz con Leche is an uncomplicated recipe consisting of staple pantry ingredients and can serve as a delightful treat for you and your guests at your next family gathering.

How to Pack Healthy and Kid-c School Lunches