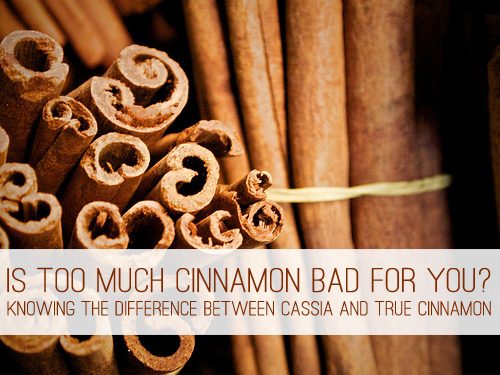 My pregnancies are typically marked more by food aversions than food cravings (with the exception of the Eggo waffles incident). Still, one thing I have been consistently craving this pregnancy is cinnamon. Oatmeal with fresh apples or nectarines and tons of cinnamon? Yes, please. Sweet potatoes with ghee and a generous coating. Mm-hmm. Apple slices sprinkled with it? YES! What is Christmas without the smell of cinnamon in the air when baking?

However, in the midst of all of my cinnamon-y cravings, I vaguely remembered reading a post somewhere about too much being a bad thing.

At the time, I’m pretty sure I wrote it off as “everything is bad for you according to somebody”, but seeing as how a little person is growing inside of me now, I figured maybe it was worth looking into just a little bit more.

And sadly, it’s true. Too much cinnamon can be a very bad thing. This is a fact agreed to by conventional sources as well as natural sources, which is usually a pretty good sign that it’s something worth paying attention to.

The good news? Not all cinnamon is bad, just the stuff we buy in the grocery store. The bad news? The other stuff is — of course — more expensive.

Because cassia bark is more easily harvested, it’s less expensive and more readily available. Honestly, it’s the distinct flavor of this variety that I love.

The problem? All cinnamon contains a compound known as coumarin. Actually, a lot of food does, so that in itself is not a problem. The problem is that cassia cinnamon has especially high levels of coumarin, which can be harmful to your liver or kidneys and thin your blood in relatively small doses — not a great combination of factors. Because of this, some European countries have official recommendations to avoid cassia altogether.

On the other hand, true cinnamon is known as Sri Lankan or Ceylon cinnamon (because that’s where it’s grown), and it contains almost negligible amounts of coumarin. You can easily buy it online from a spice retailer such as Penzeys or even from Amazon (which is where I got mine), and I would imagine that any health food stores that sell spices or herbs might have it as well! There isn’t an easy way to tell the powders apart (although the price may be a good indicator). Still, Ceylon sticks are thinner with many layers, and they can easily be ground at home, whereas cassia sticks are thicker and extremely hard.

Honestly, Ceylon has a different flavor than “conventional” cinnamon. It’s not a bad flavor…just different. I’ve read descriptions of it, including subtle, sweet, and delicate while calling the flavor of cassia harsh, although I still honestly prefer the cassia flavor.

That said, at this point, I’m replacing my daily cinnamon intake — on oatmeal and french toast and sweet potatoes, for example — with the more expensive Ceylon and reserving the conventional “cheap” stuff for baked goods and other recipes where I really want that traditional flavor and won’t be consuming large amounts of it.

If your family only uses cinnamon sparingly in baking, I’m honestly not sure this is worth overthinking or worrying about. However, if you use it generously and often as we do, it may be worth the switch!

How much cinnamon do you use? Do you buy Ceylon?

Make Your Own Fruit Rolls at Home

Add Seasonal Fruit to Your Salads

How giving up “real food” made our family healthier