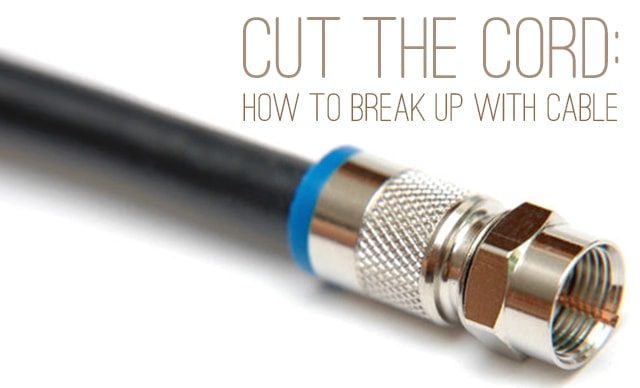 The following post is from Lauren Rothlisberger of Get Me Geeky:

During my husband’s 2007 deployment, I made a discovery: I really don’t care about watching TV. Not that I don’t appreciate a good TV show, but in the 15 months he was gone I turned on the TV a handful of times. Things are different when he is home, as we do like to dive into a good TV series together. Anyway, it disgusted me how much we were paying for DirectTV for little to no use. Shortly after, we got rid of it altogether. We lived without any cable access for a few years but were eventually duped back into DirectTV so we could watch our Redskins games from afar.

We are now approaching the end of our contract and I am ready to be rid of it again. In doing one of our finance “check-ups” I realized I could devote that money to doing something fun together as a family once a month instead of a cable subscription. Things have changed a bit since we last got rid of cable so I wanted to do a little research to review the options. We have had Apple TV for years, but I wanted to see if it was what we wanted for our upstairs TV as well. There are also a few “issues” to resolve, mainly sports.

Let’s take a look at the ways you can access television if you don’t have cable. Basically, there are two ways: streaming media (e.g. Apple TV) or an antenna.

The antenna blows people’s minds. Many of us have forgotten that there are a whole bunch of channels (NBC, ABC, CBS) we can access with just an antenna. Now don’t worry you’re not going to have to make your youngest child stand there holding the rabbit ears in place to get a good signal. These antennas have come a long way, even since we checked them out just a few years ago. They are slim, sleek, and take advantage of digital signals with multi-directional technology. Sometimes, you just have to retune your tv to access the channels you need.

Mohu is a highly rated company. You can even check your zip code on GoMohu.com to determine channel availability.  These antennas range from $25 to $150 dollars, but it is a one-time cost only.

Streaming media is the other way to access TV and movies. Streaming media means it comes in over the internet rather than cable or satellite. With streaming media you need a piece of hardware to be the bridge between your TV, the WIFI, and the software connecting you to the actual media (think Netflix). There are some TVs out there that qualify as “Smart TVs” and connect directly to the internet allowing you some streaming options, but so far they are pretty limited.

With the streaming option, you purchase the box, but in order to access media, you typically have to have a subscription to a service (Netflix, HBOGO) or have bought the media at some point.

The Catch: Be sure to research whether a particular channel needs a subscription before you dive in. Some channels may only offer limited access. You may see a channel such as ESPN listed, however, you can not actually access this unless you have another existing cable/satellite subscription.

Let’s look at the options, they all vary slightly in price and options.

Apple TV jumped on the streaming media bandwagon first. They introduced a box years ago and have been tweaking it ever since. You can access iTunes Movies and TV shows in addition to a growing number of channels and streaming options. Netflix, Hulu Plus, and HBO Go are all an option. The price is reasonable at a one-time cost of $99.

Biggest Pro: If you are a real Apple household, the integration with the iCloud, your photos, and your iTunes library is really nice. I have always enjoyed the screensaver mode which projects all our family photos on the TV if the Apple TV is on and we are not actively watching it.

Biggest Con: Apple TV does not offer access to Amazon Prime’s instant video. Rumors are this may change with the next Apple TV release.

Roku has been around for a while as well. They offer a HUGE variety of channels, at this time they are advertising access to over 1000 channels. They offer three different models, 2 of which are cheaper than AppleTV.

Biggest Pro: This is a bit of a “bell and whistles” pro, but you can plug headphones into the remote.

Biggest Con: You can play iTunes media, but it requires a third-party app. This extra hassle is probably not worth it if your media is mainly on iTunes.

Amazon recently entered this space with its own streaming media device. It is also a box and gives the standard option of channels. They send you the box preregistered with your Amazon account making it very simple to set up.

Biggest Pro: If you have used one of these streaming devices before you know how hard it is to search for things with that tiny remote. With voice search, you can find what you are looking for in half the time.

Biggest Con: This is a pretty big con if you are a big Apple person. You will not have access to any of your iTunes media.

I am going to throw Chromecast in here, but it is really not on par with the other players in the field. It is basically a small receiver you can plug into your TV then you can stream from your computer/device to the TV. There are certainly cool uses for this (hotels TVs), but probably is not a good option in replacing your cable plan.

This is one of the most common questions. Sports are a little tricky. If you are local to your sports team your antenna should pick up the games and all major sporting events. You can also look at a subscription to the MLB, NHL, or NBA network. You can then access these games from your streaming box.

Last, of all let’s look at the savings. This is a really rough estimate, but let’s say you paid about $100 a month for cable/satellite, that comes to $1200 a year. If you invested in a streaming box and an antenna that would be about $150 plus $7 a month for something like Netflix, that comes out to $234. Obviously, these are some loose numbers, but it is clear you can save money in the long run.  Visit Infinity Dish interesting guide If you want to find out the comparison between household usage of cable TV and Streaming services in the United States.

Do you use a traditional cable or only streaming media (or maybe nothing!)?

6 Ways to Listen to Music Online (Without Spending a Dime)

The Unplugged Life: Enlightening or Reckless?