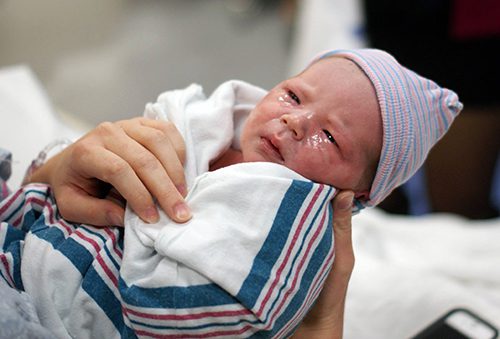 I spent most of this pregnancy worried that Jackson was not in the correct position for labor and wouldn’t turn in time. I’m not sure why that was my fear this time since I had a successful head-down VBAC between Parker’s emergency c-section and this time, but I found myself hyper-vigilant about it and constantly trying to figure out what position he was in.

Although there were times when he was head down, he didn’t really “settle” into position as early as I would have liked. At my 37-week appointment, he was laying at an angle, with his head on my hip. At that appointment, we also found out I was beginning to dilate (about 2cm, but not effaced). I had started experiencing random but fairly intense contractions at that point, so I figured those were doing most of the work.

The following Tuesday, I had my first experience with regular, intense, in-my-back contractions that lasted for an hour or so. These contractions were much like the ones I had with Parker, and based on those and the location of his movements/hiccups, he definitely didn’t seem to be in the right position yet.

My mom had been planning to buy a ticket that day for Thursday but decided to go ahead and come on Wednesday instead, just in case.

Once she arrived — and we no longer had to worry about what exactly we would do with the girls if I went into labor — we began walking to see if we could get things moving. We walked. And walked. And walked some more.

On Friday, at my 38-week appointment, my cervix had made pretty significant progress — almost 4cm and 80% effaced — and his head was definitely engaged.

We really thought I would go into labor that weekend, so we kept walking. But nothing changed. I didn’t realize at the time that my cervix was still posterior, so no matter how much we walked, his head wasn’t putting pressure on my cervix to take us from prodromal labor to active labor.

At this point, I was experiencing intense contractions regularly, but only for about an hour before they would peter out. And I was getting frustrated! 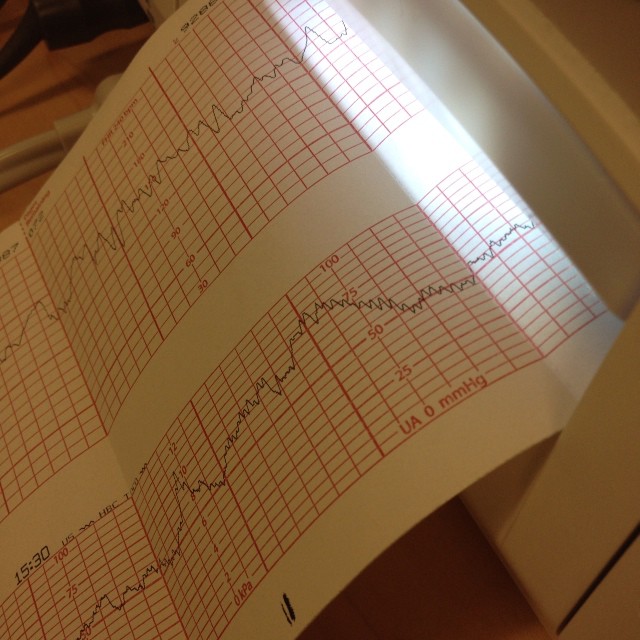 “If only these would get regular. Thinking we’re gonna be sent home…”

On Sunday, we went to church and then Olive Garden for lunch, and I started having some pretty strong pressure down there, although I wasn’t having regular contractions. However, since we were in town, we decided to make a stop at labor and delivery anyway. They monitored me for a bit, sent us walking, and then checked my cervix again, but because it hadn’t changed, they sent us home.

At my next doctor’s appointment, my cervix was still the same; however, my OB did agree to break my water on the following Monday if Jackson hadn’t arrived by then — something I was ready to do since I was losing sleep and getting frustrated with the contractions. It was also the only way to guarantee that she would attend Jackson’s birth.

As we were talking, she mentioned that castor oil was the only natural induction method that she knew worked for sure but that everyone who tried it hated it because of the vomiting and diarrhea. It wasn’t something I’d ever considered doing for those very reasons — and because my labors are so fast, I was terrified that I’d still be experiencing those symptoms during transition and pushing! — so I laughed with her and resigned myself to waiting until Monday.

However, after two more sleepless nights, I began Googling how to use castor oil to induce labor a bit more, and on Wednesday night (just shy of 39 weeks), I sent Sean to the store to get some so that I could take it first thing Thursday morning.

Reading through “success” stories, I was tempted to down a full 2-ounce bottle of the stuff to guarantee it would work, but one thing I kept noticing was that the true success stories — the ones that weren’t accompanied by horror stories — were those that took smaller doses.

I finally decided to start out with 1 tablespoon of castor oil mixed with 4 ounces of juice and repeat the dose a few hours later. We waited until Thursday morning so that we could all get a good night’s sleep first and so that I could be sure to be well-hydrated before taking it.

I got up around 5 am on Thursday morning and took my first dose. I did have to use the bathroom almost immediately, but it wasn’t extremely painful, and I was hopeful that this method might work. I visited the restroom a few more times and took a second dose at about 8 am. The second dose was followed by a bit more stomach cramping, and around 11 am, I started having regular contractions. I asked Sean to take a shower so he’d be ready to go, and I walked a bit to see if I could get them to pick up. But eventually, they died out.

After lunch, I fell asleep and woke up with a pretty strong contraction, but I honestly didn’t think much about it since we’d been through this earlier in the day. In fact, I posted on Facebook: “I sure hope I’ll know when to head to the hospital…because apparently two hours of contractions every 2-3 minutes isn’t it. Argh!” However, the contractions kept coming, and as my mom and I walked laps in the house (just to be sure they weren’t going to stop again), I had to stop walking and concentrate on them. About 45 minutes after I woke up — at 3:40 pm — we decided it was time to head to the hospital….hoping it was for real this time. 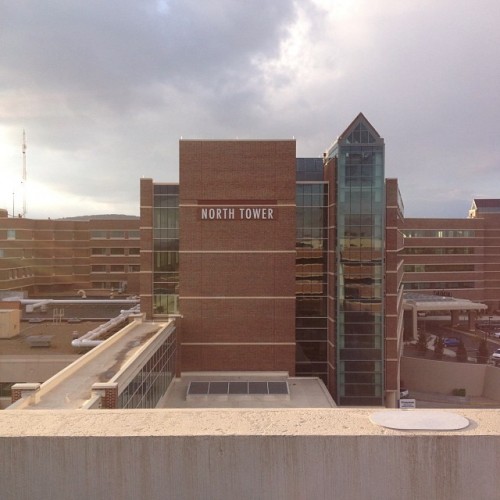 At the hospital, I was so frustrated to learn that my cervix still hadn’t changed. However, the contractions were registering as fairly intense on the monitor, so the nurse sent us to walk for an hour and a half. We walked outside until we got too cold and then walked laps inside the hospital. The contractions were still coming steadily, so when Sean and my sister (who had met us at the hospital after work) sat down in Subway to eat dinner, I kept walking back and forth in the hallway until they were done.

At this point, I was so determined not to get sent home that when the nurse met us back in the triage room at 6:30 pm, I blurted out, “I am not going home this time!” She just laughed at me, but we were so relieved that I had progressed to 5cm during that time, which meant I could stay!

The on-call doctor (who, once again, I had not met before, making that the case for 4 out of my 5 births!) came in and asked if I wanted her to break my water. I told her I did and that I was sure it would go fast once she did.

They got us settled in an L&D room, but because everything was happening at shift change, it felt like it was all moving super slowly. Finally, at 7:40 pm, the doctor broke my water. I stayed in bed for another 20 minutes so they could monitor Jackson’s birth heart rate to ensure he was handling the contractions. When the nurse came in to offer me a portable monitor so I could walk (hospital policy because this was my second VBAC), I realized that the contractions were getting pretty intense. I really didn’t have any desire to walk. 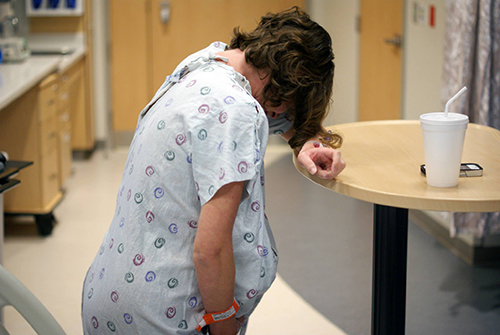 Instead, I stood by the bed, leaning on a table. This part of labor was so weird for me. The contractions were coming fast, and I kept looking up at the clock, feeling like a ton of time had passed, but the minute hand seemed like it was barely moving.

At about 8:30 pm, I asked Sean to call for the nurse so that I could be checked. I’d never known when it was time to push except when they told me my cervix was complete, but I knew something was happening. I was about 7cm at that point and was not standing back up, choosing to kneel on the bed instead. I’ve given birth naturally 4 times now, but I think this may have been my most painful labor, and I found myself literally clawing at the bed while trying to reassure myself that I could do this.

About 10 minutes later, I realized that I needed to push, not quite believing that I could make that call myself, and the nurse checked me and confirmed that my cervix was fully dilated and we were ready to go.

My response? “I’ve never said this and meant it before, but can you please give me something for the pain?” Of course, this nurse laughed at me and told me it was too late, but if she had offered me an epidural, narcotics, or even general anesthesia at that point, I think I would have taken her up on it.

The doctor and multiple nurses appeared seemingly out of nowhere and got me all set up to push. I pushed through two contractions somewhat halfheartedly (it hurt so bad). Still, on the third contraction, I began to feel the ring of fire (which was honestly a relief compared to the other pain I’d been experiencing), and I pushed three times — once for his head, once for his shoulders, and once for the rest of his body. I was sitting almost upright and was able to watch Jackson be born, which was a pretty amazing experience! 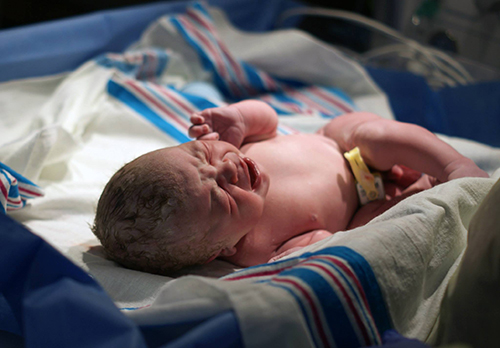 They laid him on my chest for a minute before taking him over to the warming station (where they kept him for too long, even though I kept asking him back!). I had to be given Pitocin because I was bleeding pretty heavily and needed stitches for a second-degree tear along my episiotomy scar (again…ugh), but the adrenaline and euphoria pretty much kept me going as they cleaned us both up and got us ready to move to the mother-baby unit.

It really did happen as fast as it sounds, but it felt like time stood still in there for me a bit, so I asked my sister to send me the texts between her and my mom so that I could look at the timestamps on them. Reading this (“Is she okay?” “No.”) makes me laugh: 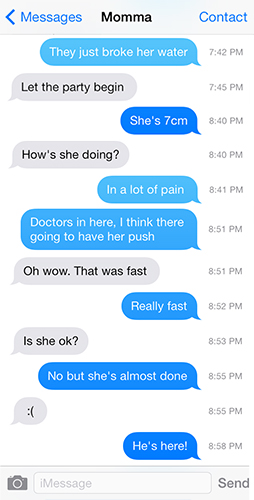 Thankfully, my recovery has been really easy so far. My mom was here for a week after Jackson’s birth, Sean is home full-time, and we have four big helpers, so I’ve been able to take it pretty easy!

But I don’t think I ever want to do that again. 🙂

Planning to Buy a Smart Bassinet? Here are the Brands to Check Out

6 Ways Your Child Could Benefit From NDIS