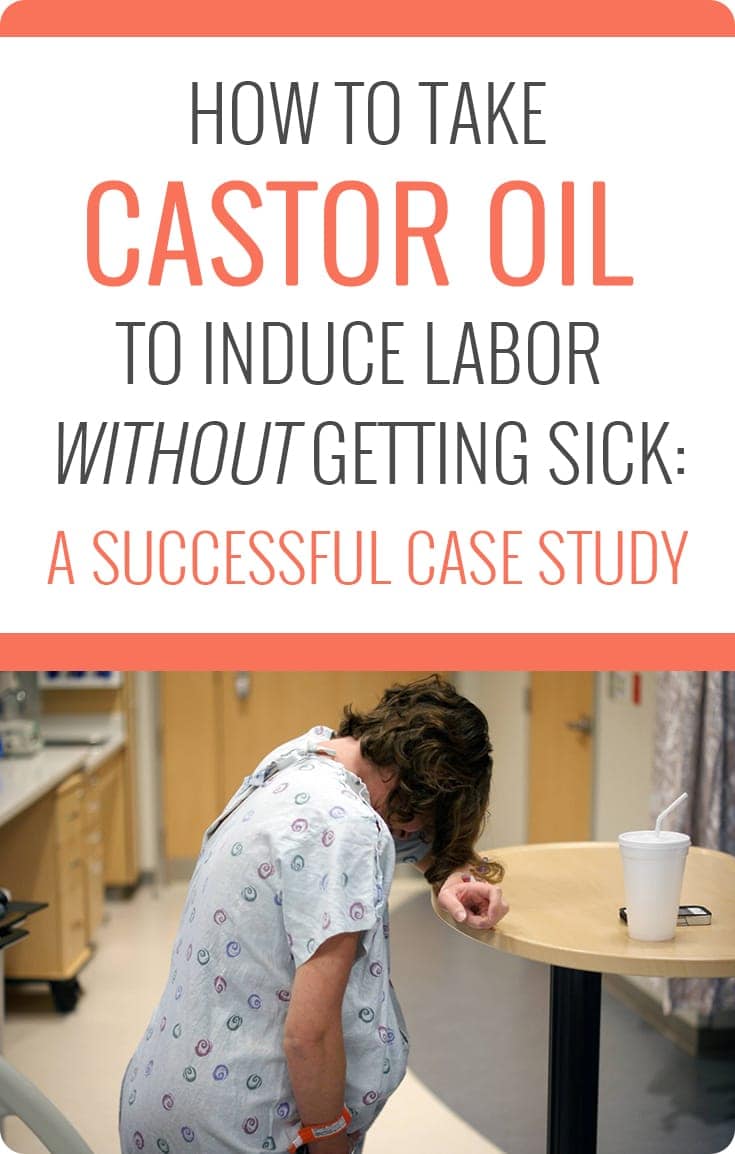 As I mentioned in Jackson’s birth story, after 10 days of prodromal labor — and with my doctor’s permission — I used castor oil to naturally induce labor. Despite all the horror stories I’d heard and read, it actually worked pretty perfectly for me, so I thought I’d kick off this series by sharing how I used it and what I learned from the experience:

Please note, however, that I am not a licensed medical professional, and this is just my experience, not medical advice.  I have to admit that remote writing jobs have little to do with things. You should consult with your doctor or midwife before using castor oil (or any other natural induction techniques, for that matter!). It’s also worth noting that the definition of full-term has been moved from 37 weeks to 38 weeks of pregnancy, and you shouldn’t attempt to induce labor before then!

Castor oil is a stimulant laxative that causes contractions in the bowels, which in turn stimulates uterine contractions. Like most natural induction methods, this only leads to labor if your body is ready for labor — full term, cervix soft and dilating, etc. While there is always speculation that castor oil also causes the baby to pass meconium, it’s my understanding that castor oil does not cross the placenta, so the slight increase in meconium with castor oil-induced births may instead be linked to its popularity after 40 weeks of pregnancy. Or it can cause too many complications during pregnancy period.

As I researched castor oil doses and experiences myself, a common theme emerged: women were taking large doses of castor oil out of desperation for it to work and then having terrible reactions to it. Castor oil often comes in a 2-ounce bottle, and many women reportedly downed the whole bottle at one time. Not only is that gross going down, but it causes major diarrhea and can also cause nausea and vomiting. This can also lead to dehydration and other complications that really don’t make for a smooth labor and delivery.

As desperate as I was to kick things into high gear, my desire to not be throwing up or stuck in the bathroom during labor was stronger, so instead of a large dose, I went with two smaller doses.

But first, I tried my best to get a good night’s sleep ahead of time, pregnancy exercises and I drank plenty of water to help keep dehydration at bay.

Before We Take it, What is Castor Oil?

Castor oil is a vegetable oil that is pressed from castor beans.

Castor oil is very high in ricinoleic acid which affects the small intestines. Because of this fact, it is used as a natural laxative. In fact, the FDA has even designated it as generally accepted as safe and effective for over-the-counter use.

Now that we know it is vegetable oil and the FDA has signed off on it for ingesting for other problems like constipation, we can safely say that we can try it out for labor induction.

How Much Castor Oil I Used to Go Into Labor

When I woke up at 5 am the next morning, I mixed 1 tablespoon of castor oil with 4 ounces of orange juice in a half-pint mason jar. I put the lid on and shook it vigorously and then downed the mixture. (The oil and juice don’t really mix, but shaking vigorously makes it frothy and mixes them together temporarily.) Because taste is actually linked to your sense of smell, I held my breath as I drank it so that I didn’t have to taste it at all.

I needed to use the bathroom almost immediately, but it wasn’t too bad (all things considered). I had to go a few more times, and at 8 am I repeated the dose.

Around 11 am I started having regular contractions, but eventually, they died out (as they had been doing for 10 days).

Feeling somewhat discouraged, I took a nap on the couch after lunch, waking up with a pretty strong contraction, which I honestly didn’t think meant anything. I had to use the bathroom one more time, and then I realized the contractions were still coming and there seemed to be a noticeable difference in their intensity. My mom and I walked laps in the house (just to be sure they weren’t going to stop again), and I was having to stop walking and concentrate on them. After about 45 minutes, with contractions coming every 3-4 minutes, we decided to head to the hospital along with some maternity dresses, diapers, and other essentials.

Five hours later, Jackson was born. And the best part was that I didn’t experience any diarrhea, nausea, or vomiting during labor itself. I was still slightly dehydrated when we reached the hospital, though. If I had planned better, I would have had an electrolyte drink on hand as well to help prevent dehydration from diarrhea.

Have you ever used castor oil? What other natural induction methods have you tried?

Ways Parents Can Reduce the Likelihood of Teenage Rebellion