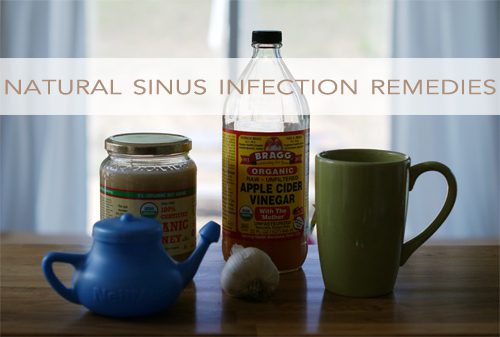 At the beginning of April, our family was hit hard by a virus that seemed to be going around our area. After two weeks of ups and downs — with fevers, chills, coughs, stuffy noses, viral conjunctivitis, and more– I was already done for already…and then I woke up one morning with a sinus infection.

This wasn’t an “I think I might have a sinus infection” moment, it was a “my face hurts so bad I could (and did) cry, I can’t bend down to put on socks because my head’s going to explode and I won’t even tell you about all of the (ahem, I hate this word) mucus I am dealing with” moment.

I had been working hard to use natural remedies, and thankfully, the rest of my family had turned the corner the same night I descended to the next level of Hades.

In the past, our attempts to use a natural medicine cabinet usually all go the same way: we start with natural remedies, and then we get tired/overwhelmed/discouraged and end up with OTC drugs or unnecessary antibiotics. However, this time, everyone else’s progress was the encouragement I needed to keep trying natural remedies for myself even though I just wanted to curl up in a ball and die.

For the cold/flu, this is what we ended up using:

I knew, however, that those would not be enough for my sinus infection, especially if I wanted a quick recovery, so I also added these to my natural sinus infection remedies:

I had been hearing about the benefits of raw apple cider vinegar for months (and pretty much ignoring them), more of which I’ll share with you in another post, and one of the things that stood out to me was that ACV is good for clearing the sinuses.

Already had Bragg’s Apple Cider Vinegar on hand, so I followed the recipe on the back of the bottle: 2 teaspoons ACV, 12 oz. of water, and 5 drops of stevia. I drank 3-4 glasses that the first day, and as an added benefit I was also staying really hydrated, which is important for clearing the sinuses.

In The Green Pharmacy Herbal Handbook, James A. Duke, Ph.D., says this: “Garlic is potent medicine, arguably one of the best that nature has to offer…Garlic is the finest in ‘food farmacy.’ You don’t need extracts or isolated compounds for a medicinal effect; you can ingest the whole herb.” He gives it a three-leaf rating as one of a few herbs that have “proved itself in one or more strictly conducted scientific trials that involved people.”

In Prescription for Nutritional Healing, Phyllis A. Balch, CNC, calls garlic a “versatile healing herb” and “one of the most valuable foods on this planet.”

Although garlic can be used in a variety of ways, one of my favorites is as an immune booster. It’s most effective raw, and because I was pulling out the big guns, I crushed a whole clove of garlic, covered it in raw honey, and swallowed it straight down twice that first day.

Drinking hot tea and broth is another simple remedy because the warm liquid helps clear your sinuses and keeps you hydrated. Add to that the health benefits of bone broth (which I, unfortunately, didn’t have on hand at the time, but I do now!), for a win-win.

As a side note, drinking hot tea while I was sick also began my transition to going caffeine-free. I was able to step down from the caffeine in a triple espresso to the caffeine in a cup of tea (which is significantly less) and then on vacation, I stopped drinking caffeinated versions of either altogether.

Some people hate the thought or feel of the neti pot, but I must admit that I find it really soothing once it’s able to run through my sinuses. I added the premixed packet to boiled (and cooled) water and did an irrigation 3 times a day for a few days.

Finally, the value of warm steam for relieving sinus pressure and clearing the sinuses can’t be understated. I took several hot showers, massaging my sinuses with a warm cloth while standing in the steamy shower, and I also heated water on the stove, removed it from the heat, and draped my head and the pot with a kitchen towel to create a steam tent so I could breathe in the warm steam.

I dealt with almost chronic sinus infections in high school and college, taking many rounds of antibiotics during those years. Still, this time I experienced a dramatic turnaround within 24 hours of starting this regimen. I never had to take a single over-the-counter or prescription drug except for ibuprofen for my headache (the one drug I’m unwilling to give up, although I use it sparingly). That was a huge step for us and one that I hope will be the foundation as we continue to move forward with building a natural medicine cabinet.

What other natural remedies for sinus infection would you add to this list?

Endometriosis: Why Is This Illness So Commonly Dismissed by Doctors?

Who would be the perfect candidate for PrEP?

Why Do You Need CBD Oil?