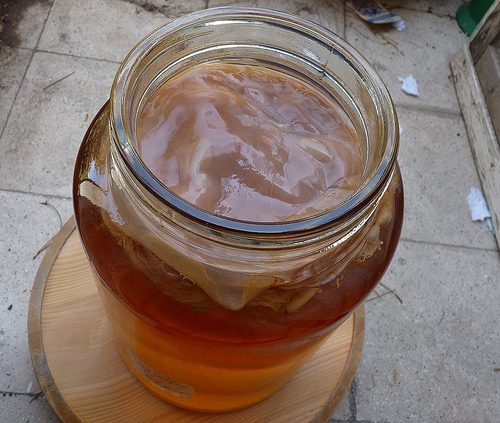 The following post is from Kate of Modern Alternative Mama: Why I Love Kombucha

I joined a Weston A. Price group at the very beginning of 2009, and all the stuff people were talking about was so confusing to me.  Soaking grains?  FCLO?  Kombucha?  I had no idea what any of these things even were, let alone why I would want to have or do them.

I figured out what kombucha was (a fermented Chinese tea that is probiotic) and bought a bottle.  I was not impressed, and neither was my then 1-year-old daughter.  She refused to drink any of it, and the bottle sat, barely touched, in the fridge for months until we threw it away.  Not for me.

About a year later, after discovering my kids had all kinds of food allergies, I was faced with a new dilemma — how to get probiotics and healthy foods into us without breaking the bank.  I revisited the idea of kombucha and found someone to send me a SCOBY (Symbiotic Culture of Bacteria and Yeast; you use this to brew it) and decided to give it a shot.  I’d tasted a different flavor from the store and loved it, but at $3.50 for a 16-oz. bottle, that would get crazy expensive. It was time to take the plunge and brew my own.  (This was April 2010.)

Two and a half years later, there were six gallons of kombucha brewing in my kitchen.  I just finished a bottle before sitting down to write this!  I’d like to introduce you if you’ve never heard much about it.

Kombucha, as I mentioned above, is a fermented Chinese tea.  No one is quite sure from where it originates.  It is brewed with a SCOBY, also sometimes called a mushroom (although it is not a fungus, it is just kind of funny-looking).  The brew starts with weak sweet tea; the culture consumes the sugar and ferments the tea.  Plain kombucha tastes a little bit like apple cider vinegar (some say) and is usually bubbly.

There are several benefits to kombucha, and I’ll just summarize a few here.

Trying to kick soda?  How about coffee?  Kombucha can replace these!  It’s carbonated, like soda (but naturally so, not forced) so it satisfies many peoples’ cravings.  But it isn’t full of the sugar, artificial colors, flavors, etc., that soda is.  It contains a very small amount of caffeine, but more importantly, a lot of B vitamins, so it can help naturally give you energy (thus replacing coffee and other caffeinated drinks).

In addition to helping you kick a soda addiction, kombucha has excellent health benefits.  It is great for hydration (contains electrolytes), has B vitamins for energy, and has probiotics.  In fact, it has so much good stuff that if you’re not used to probiotic foods, you might want to start slow!  It can have a pretty strong effect on some people.

Cheap and Easy to Make

I mentioned it’s really expensive to buy…but to brew yourself, it only costs around $1 a gallon.  It will take only 15 – 20 minutes of your time every week or two, making it very easy.  Plus, at home, you can make any flavor you like.  I enjoy strawberry lemonade, and a friend of mine recently made apple cider and cinnamon.  Get creative with any whole fruit or juice and come up with something you like best.  You can even add other herbs to increase the health benefits!

Hopefully, I have you convinced that this is something you’d like to try. Why not?  It has so many benefits!  (And it’s super yummy!)  But trying something new can be rather intimidating.  I know I felt awkward about brewing the first few times.

Maybe you’re a visual learner.  In that case, I hope this kombucha video helps you get the confidence to give it a shot!

Have you ever tried kombucha, or do you hope to try it soon?  What flavor do you most enjoy, or would you try first?

5 Simple Ways to Reduce Sugar in Your Diet

How to Write Your Own Recipe