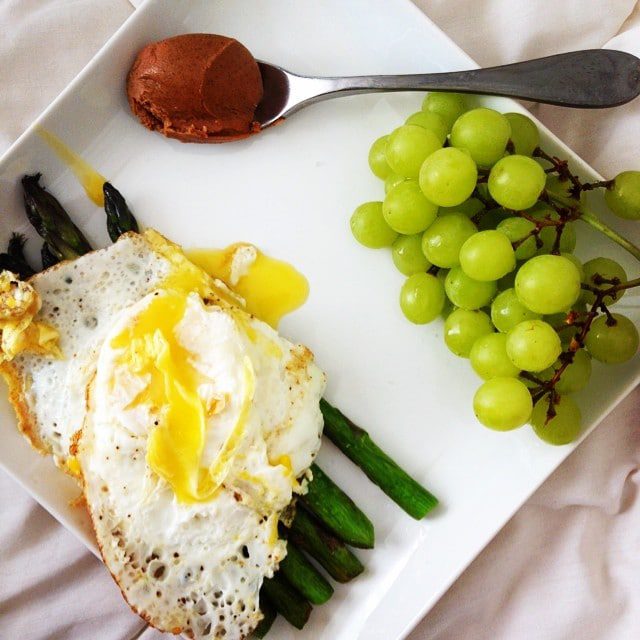 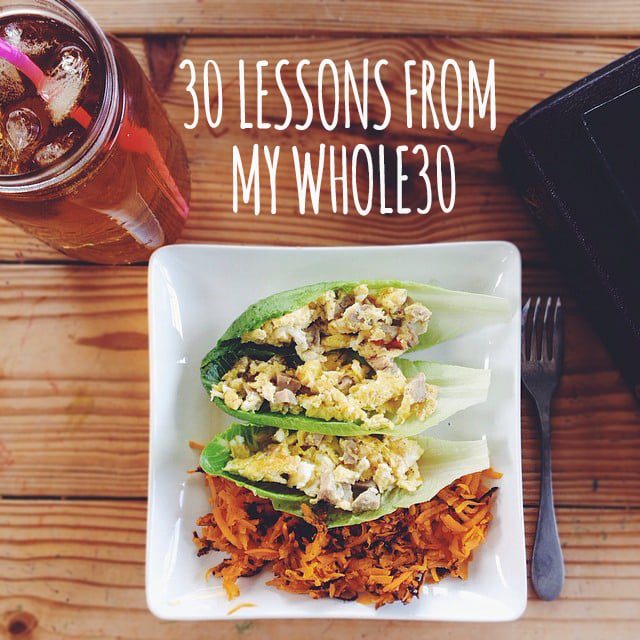 Last Friday I finished my Whole30. Because I gave up halfway through due to morning sickness and food aversions the first time through, I was excited to make it all the way through this time and to meet my goals for forming good habits and getting back to my pre-pregnancy weight.

Next week I’ll share more about why I like the Whole30 program and how I prepared for it, but today I want to share 30 lessons I learned this time around:

1. Just because some thing is hard doesn’t mean it’s not worth doing. I think it’s safe to say that applies to pretty much any area of life.

2. Anything tastes good with the right spices. And sometimes all it takes is a little salt and pepper.

3. It’s true that drink calories are the worst. Lattes are my downfall.

4. Veggies for breakfast might seem weird but it makes a difference. When I start out with a protein + veggie based breakfast (rather than carbs or sugar), I’m less likely to give in to sugar cravings the rest of the day.

5. You can teach yourself to like almost anything. A friend challenged me to learn to like mushrooms, and while they’re not yet my favorite, I discovered that I actually do like them sauteed with onions, especially with fried eggs for breakfast!

6. Variety really is the spice of life. Eating the same thing for 30 days straight can get old real fast. Trying different combinations, preparation methods, and all new ingredients keeps it interesting.

7. But simple is better. On the other hand, several people told me that having set breakfasts and lunches would make a world of difference, and I really found that to be true. I followed a formula of eggs + sauteed veggies and a side of fruit for breakfast and roasted veggies + meat or seafood for lunch, and it provided enough structure so that I could enjoy a variety without standing in front of the fridge trying to figure out what to eat.

8. There are quite possibly an infinite number if ways to prepare eggs. Scrambled with veggies, scrambled with meat, fried, hard-boiled, soft-boiled, omelettes, cooked inside peppers or a muffin tin or meat cups, baked in a casserole, and the list goes on!

9. Mini romaine leaves are the perfect substitute for bread. I’ve only ever found these at Costco, but I absolutely love them. Little 5″ heads of romaine lettuce make the perfect size leaves for sandwiches, lettuce wraps, etc.

10. When you retrain your taste buds, fruit makes the best dessert. I could almost live without dessert as long as I have banana ice cream, strawberries and coconut cream, baked pears or pineapple, or apple slices with cinnamon!

11. The Whole30 timeline? It’s pretty much spot on. Surprisingly, the first few days weren’t bad at all for me this time around. But food boredom on Day 21? Yes. I was so ready to be done, and it was during the last week that I started to slip because I just didn’t have the motivation to finish.

12. I’m not even sure I know what it feels like to be actually hungry. One thing I realized is that I’m not sure I really even know what hunger feels like (and I for sure haven’t ever experienced the hunger that many other people do on a regular basis). I eat when the clock says it’s time to eat, when I’m tired, when I’m bored, when I’m happy, when something sounds good, etc. But I don’t know about hungry.

13. I often snack out of habit. On that same note, I’m not sure how many calories I’ve consumed simply out of habit, but I bet it’s a scary number.

14. It’s important to focus on what you can have rather than what you can’t. I’ve said it before: The key to making lastiing food changes is to focus on the foods you get to eat and not those that are “forbidden.”

15. The key to staying full between meals is enough fat. Even though I’ve heard about the benefits of fat many times from real food advocates, this is a hard concept for me to wrap my head around. But adding fat to my meals — a spoonful of almond butter, half an avocado, a generous spread of coconut oil — helped me to stay full longer.

16. I’m a happier person when I eat enough of the right stuff. The term “hangry” (hungry  + angry) has been coined for a reason, and it certainly holds true in my life. But I’m also moody when I’m eating junk rather than making healthy choices.

17. Preparation is key. The busier life got for us last month, the harder it got to stick to “the plan”. But surprisingly, the three days we spent commuting an hour-and-a-half to an academic camp was not the hardest part. Because I had prepared food for all three meals — chopping veggies, making a big batch of egg salad, etc. — it was really easy to stick with it. I need to get back in the habit of doing that every Sunday!

18. You can roast any veggie. Seriously, anything. Cauliflower, carrots, brussel sprouts, radishes, onions, potatoes, asparagus, peppers — they all taste amazing when roasted!

20. Family dinners are a must for parents doing the Whole30. I’ll talk more about this next week when I share the actual how of my Whole30, but it made a huge difference that I planned most of our meals around a Whole30-friendly “base” that we could all eat. For example, taco chicken became quesadillas for the family and taco salad for me. I honestly don’t think I would have survived otherwise. 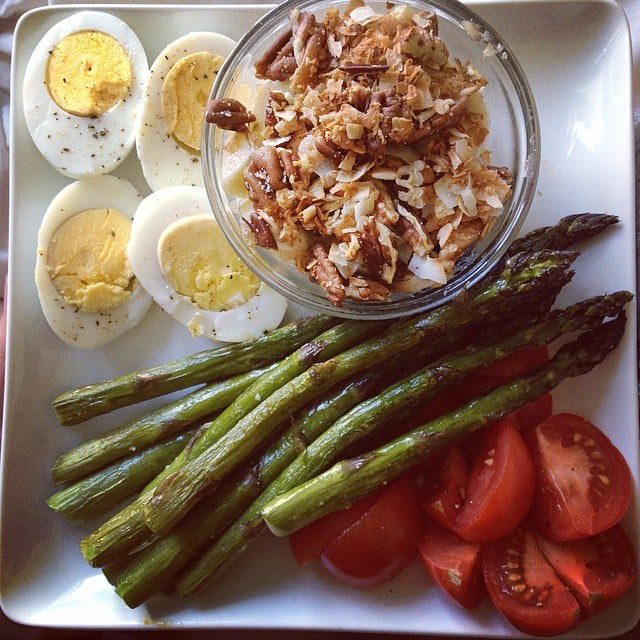 21. When I’m willing to try new things my kids are too. My 4.5 year old now considers asparagus a treat (as do I!), and it’s amazing what I can get the girls to try when it’s on my plate!

22. There’s a fine line between just right and overcooked when it comes to spaghetti squash. Let’s just say one is delicious and one is a mushy mess.


23. Costco is your Whole30’s best friend. I know it sounds crazy, but our family has a Costco membership almost exclusively for the produce anyway, and that is a huge help during a Whole30, as are their meat options. The produce is always high quality and delicious, and they do a pretty good job of featuring in-season produce as well. For this Whole30, I couldn’t get enough of their sweet potatoes, which are giganganormous!

24. Sweet potatoes make everything better. Thanks to Costco, I am pretty sure I consumed close to 30 sweet potatoes over the past month, whether I shredded them for breakfast hashbrowns or — more often that not — simply baked them and ate them right from the skin. When I mentioned on Day 5 or 6 that I was surprised by how good I felt already, my sister-in-law chimed in and said that the starches in sweet potatoes can help you avoid carb flu, and I think that was definitely the case for me! Plus, what other vegetable can so easily masquerade as a dessert without adding a single thing to it?!

25. Big changes are easier and more fun with friends. I’ve been privileged to be part of a Whole30 group on Facebook during both of my Whole30s, and it just makes it more fun. This time around, our group was mostly local friends, and it was really fun to share finds, compare meals and encourage each other as we went. I’m not sure I have the willpower to do the challenge without accountability!


26. It’s worth preparing food you enjoy. On Memorial Day, we splurged and made crab cakes, and I savored every single bite. It’s tempting to walk through a challenge like this expecting to feel deprived and unhappy, but choosing foods that you love makes it so much easier. I took this lesson to heart and made crab cakes again last week!

27. If you’re not drinking green tea, you really are missing out. I have always been hesitant to drink green tea (it just didn’t appeal to me!), but I read that green tea can increase your metabolism by 17%, and that was enough for me to at least try it. As it turns out, I really like iced unsweetened green tea, and I’m fairly convinced that drinking a quart of it every day contributed to my success this time around.

28. You can’t just cheat once. Oh, how I wish I had the willpower to eat a chip or a square of chocolate without falling off the wagon, but I really don’t. Things started to go downhill fast after I began to cheat on Day 23, but I was able to reign it in a little bit and finish fairly strongly. Next time, no cheating!

29. I’m not very good at moderation but it’s still a worthy goal. The challenge for me is figuring out where to go from here. I don’t want to live 100% paleo (or even 80% if I’m honest), but I need to figure out how to eat treats without getting to the point where I’m snacking all afternoon or eating a pan of brownies in a day. The good news is yesterday I had one chocolate chip cookie. Just one. Even though the package is sitting in our pantry calling my name. So we’ll consider that progress!

30. The benefit of the Whole30 lasts long after the 30 days are up. I actually learned this lesson my first time around. Even though I wasn’t able to finish that Whole30, my love for roasted veggies (which started during that challenge) has lasted for more than a year. I’m hopeful that many of the habits formed this time around — drinking green tea, veggies for breakfast, etc. — will last as well.


How about you? Have you done a Whole30? Is it something you’ve considered doing?

Make Your Own Fruit Rolls at Home

Using Herbs in Food, as Nutritional Supplements and for Healing