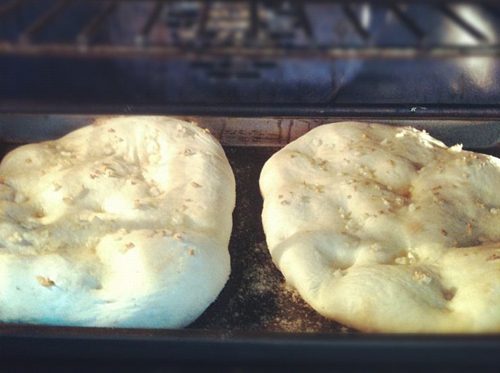 It’s been a year since Jessica from Life as Mom approached us all with the idea of participating in the Eat Well, Spend Less series to share tips and ideas for saving money on groceries without sacrificing nutrition or quality. At the end of that first month, we decided to continue the series with monthly themes, and it’s been really fun — and inspiring — to tackle various areas of this topic.

This month, we’re taking a look back at how our food philosophies, spending habits and menus have changed over the past year. Since our family has been taking baby steps toward healthier eating habits, it’s exciting to see how those tiny changes have added up over the past year.

Although I’ve always been a proponent of meal planning, it’s only been in the past few months that I’ve gotten really good at being realistic about what I will be able to do in a given week. In the past I’ve been one of those people who wants my meal plan to look healthy, so I would plan lots of great meals even on busy weeks when I probably would not have the time or energy to actually prepare them. Unfortunately, although I’m learning to enjoy cooking more, it’s still usually the first thing I want to give up when I’m feeling overwhelmed. By being unrealistic, I’ve set us up for fast food runs way too often in the past.

Now, my goal is to be realistic and choose simple meals, without sacrificing nutrition. For example, this week my grandmother is visiting us. I knew the days before her visit would be very busy with getting the house ready and getting ahead with work, so our dinner menu included pancakes, smoothies and popcorn and crockpot lasagna, which are all super easy to prepare.

Produce still plays an important part in our grocery budget, but I realized this winter that I let that slide during the colder months. We don’t eat as many winter veggies as we could, and I’d like to incorporate more salads year round. I’m going give these salads in a jar a try because I think having them prepared and ready will help that goal.

Although we didn’t have the best luck with last year’s garden, I’m going to try again this year (hopefully with more success!). I love how excited my girls get about veggies grown in our very own yard!

The biggest area where I’ve improved this year is simply making more from scratch. After debating with myself for several months, I decided to ask for a breadmaker for Christmas, and it was such a good decision. I now make homemade bread several times a week, and I even find pizza dough easier since the breadmaker takes care of most of the mixing, kneading, rising for me.

Although I am still cautious about filling my kitchen cabinets with small appliances, I’ve got a new appreciation for how some of them make cooking from scratch more realistic for a busy mama like me. In fact, I asked for both an ice cream maker and yogurt maker for my birthday. The yogurt maker is the more realistic of the two purchases, since making homemade yogurt has been on my to-do list for ages but I can’t ever seem to get my act together to actually do it, while the ice cream maker is a fun gadget so that we can enjoy fresh, homemade ice cream without concerns about the ingredients or preservatives used.

I’ve found that making more from scratch makes it easy to avoid the unhealthy ingredients that are found in so many processed foods, so that’s a definite bonus.

In addition to cooking from scratch, I’ve been spending more time making pantry staples from scratch as well. This week my kitchen has seen homemade pasta sauce and chicken stock, and I’d love to start making fresh butter each week as well. I especially like the pantry staples — like the pasta sauce and chicken stock — that I can make in large batches. Right now I’m freezing the extras, but I am determined to learn how to can this year!

In the coming months, I’d also like to try making sugar-free strawberry preserves, ricotta cheese, and some more healthy snacks, since we tend to rely on “healthy” snack food like Clif Kid and Annie’s Homegrown a little too much!

Taking Food on the Go

Another area where we’ve made huge improvements is on packing a lunch or picking up healthy “fast food” when we’re out and about. Because of the distance between our house and “town”, we often get stuck in the car during mealtimes, and I’m a little embarrassed to admit — given our focus on healthy eating this year — that there were weeks when we’d eat McDonald’s more than once.

I was inspired last year by Shaina’s grocery store “fast food”, and I’ve been trading the drive thru for a quick run through our local store for pre-sliced fruit and string cheese, which doesn’t cost much more and is definitely healthier!

Getting the Kids Involved

Although I’ve always known the importance of having the kids in the kitchen from an early age, it has not been something I’ve really enjoyed — I think mostly because we had so many littles so close together and it can be stressful to have them all in the kitchen at the same time. However, I’ve been enjoying having my youngest help me cook while her big sisters play outside, and I’m doing better about having the big girls help me one at a time so that we’re able to spend that special time together and they get a chance to help in the kitchen.

The biggest change we’ll be making in the coming months is eliminating processed sugar. I’ll be inviting Life Your Way readers to join me in a Kicking the Sugar Habit Challenge, and I’m already making lists of things we can still eat during that challenge, which I’ll be sharing with you soon!

Other than that, I’ll just be focused on more of the same…realistic meal planning, incorporating more seasonal produce, cooking from scratch, making and preserving my own pantry staples and inviting my girls into the kitchen more often.

Read the food journeys of the other Eat Well, Spend Less bloggers here:

What food changes have you made during the past year? What’s been your favorite Eat Well, Spend Less topic?

Planning a Wedding During a Pandemic

Why I Love My Envelope Budget System