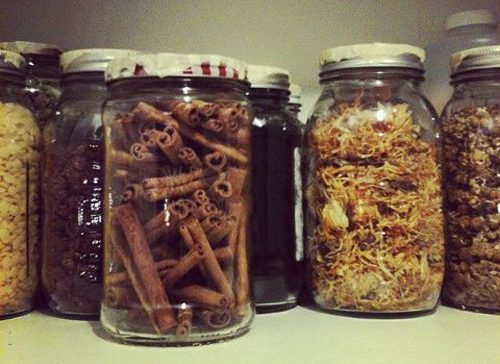 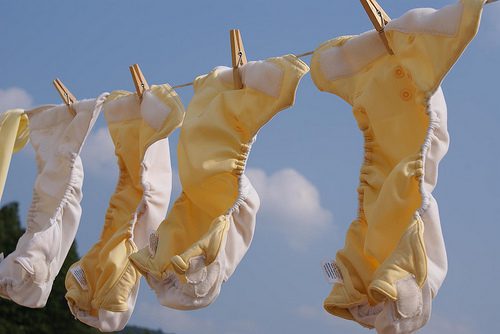 Going green wasn’t a one-time decision for me. In fact, I’m not sure baby steps is the right way to describe it either. It’s really been more of a two steps forward, one step back process as a I learn about different areas of a green lifestyle, try new things, inevitably fail on the first attempt to change our purchasing or behavior patterns, and try, try again. Some of those attempts stick and some, quite frankly, I end up walking away from, at least for the time being.

For example, although we’ve tried cloth diapers repeatedly over the past 4.5 years, the minerals in our water led to stinky diapers too many times for me to count, and the process of stripping them and hanging them in direct sunlight every time was just too much. So I packed them away.

I also made a three-week attempt at the no-poo method of cleaning my hair until I reached the point where I really couldn’t stand the oiliness any longer. Who knows how close I was to that magical “hump” when my hair would stop producing so much oil, but I just couldn’t hang on to find out.

And while I love Laundry Tree soap nuts myself, my husband missed the “Tide clean” smell, and I just couldn’t bring myself to do separate laundry for different members of our family, so we switched back to traditional detergent (although we still avoid fabric softeners and dryer sheets).

It can be discouraging to try to “do it all”, so I’ve pretty much given up on the idea of ever living perfectly green. Instead, I’m tackling little things, one at a time, and making lasting changes that are good for our bodies, our finances and the environment. And those changes are adding up!

Here are the areas where we’ve made lasting changes: 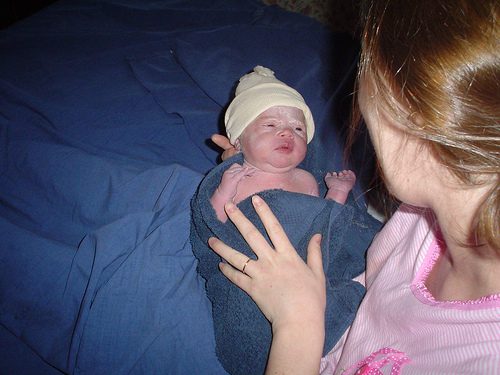 Natural childbirth (a term I find laughable to this day since I think birth is pretty natural whether you’re medicated or not) was probably the first green decision I made, although I didn’t really think of it that way at the time. Honestly, I was just scared to death of the epidural needle (although I realized it wasn’t nearly as bad as I’d thought during my semi-emergency c-section with #3), and then once I made the decision to give birth without one, I discovered there were many other reasons not to as well as a host of other things to consider as well.

I had also noticed a funny trend: Women who’d had epidurals tended to talk about birth as a painful, dreadful experience, while those who’d given birth naturally talked about it in a much different way (this is a generalization, of course). I decided I wanted that happy “natural” experience without losing feeling in the lower half of my body, and so we prepared for it with lots of research and a Bradley class.

In the end, I ended up with an unmedicated hospital birth, an unmedicated birthing center birth, a c-section (our daughter was footling breech, and we didn’t know it until I was in active labor) and an unmedicated VBAC.

I’ve always been a compulsive researcher, and even more so since I became a mom, and homemade baby food seemed like the next natural step for us — not only for the cost savings but also to have more control over the food my kids were eating and to be able to combine flavors and textures.

By our fourth child, I also followed a bit of the baby-led weaning fad (although I hadn’t heard of it at the time), which meant I didn’t really make special baby food as much as make sure we had appropriate table food available for her.

3. Get the Antibacterials Out

A couple years ago I participated in a Spring Cleaning series with Katie from Kitchen Stewardship. One of the themes was “Get the Antibacterials Out“, and Katie’s research and the things I learned that week had a profound impact on me. I had never really bought antibacterial soaps on purpose, but I began actually avoiding them completely. With the continued prevalence of antibiotic-resistant bacteria, I’m more committed to this than ever (although, in full disclosure, we do still use bleach occasionally!).

I am not sure where I first heard about coconut oil, but I’ve loved it since the first two-pack I purchased. We use Nutiva Organic Extra Virgin Coconut Oil, and I always keep a big jar in my kitchen and another in my bathroom. We’ve used it for everything from “buttering” our toast and frying chicken to soothing wind-chapped cheeks and eczema and homemade deodorant.

Of all the changes I’ve made, this is probably the one I put off for the longest, but the one that has stuck the most. It’s a funny thing to get excited about, but I no longer dread that time of the month thanks to the DivaCup. It’s cleaner, cheaper, more comfortable, less scary (because TSS worried me every month when I was using tampons) and better for the environment. Doesn’t get much better than that!

Read more of my thoughts about the DivaCup here.

Although I’ve just scratched the surface of this particular topic, I’ve made some pretty lasting changes in the way we approach our health. We swear by Vitamin D for both energy and immunity, and I’ve gotten rid of almost all of the traditional medicines in our cabinet, although we do keep ibuprofen on hand for both the kids and adults, Tums for when the baby inadvertently gets some dairy (which causes her reflux to act up) and Sudafed for occasional use when a cold leads to unbearable sinus pressure.

I’ve also started making some of my own remedies, such as elderberry syrup, and I’m learning more all the time about how herbs and plants boost our immune systems and work with our bodies to promote healing. In fact, I just purchased both The Green Pharmacy Herbal Handbook and Prescription for Nutritional Health to learn more about these topics!

Look for more posts to come in the coming months as I continue to learn — and try — new things.

7. Eliminating Plastic in the Kitchen

A couple of years ago, a tour through our kitchen would have included a generous supply of both plastic storage containers and plastic Ikea dishes and silverware for the kids. These days, we’ve eliminated almost all of the plastic, using real dishes and silverware, glass jars and Pyrex storage instead. We do still use plastic lids on our storage containers and the baby’s sippy cups are still plastic, but that’s about it.

From our stainless steel measuring spoons/cups to our glass straws, we’ve found that we like the higher quality, lasting materials better!

Last year, I decided it was time to start reading labels more carefully. I was surprised to discover how many products on the market contain HFCS and artificial dyes, and I didn’t want my children ingesting them as part of their daily meals and snacks. I don’t worry as much about special treats — although we do try to avoid heavy amounts of food dye since there is a clear link to its effect on our oldest’s behavior and moods — but we avoid it pretty strictly otherwise.

In fact, the other day my 6 year old came to me to “confess” that something she ate at someone’s house had high fructose corn syrup in it because she knows that we don’t buy those products ourselves!

Although I don’t always succeed, I do like to try new things, and I almost always have a list of things I’m researching and learning about. It takes me a while to finally take the plunge, but as it turns out, the longer something has marinated in my heart and mind, the more likely it is to stick anyway!

Right now, I’m hoping to learn more about and start making changes in these areas:

I’m not rushing it, but expect to hear about those sometime in the future!

What about you? What “green” changes have you made that have stuck? Which haven’t?

Question of the Day: Tricks for Remembering Your Reusable Shopping Bags?

When the In-Laws Aren't Eco-Concsious…And You Live With Them!