Earlier this week I read a post from Gizmodo titled No, Your Private Messages Are NOT Public on Facebook. Tech sites generally like controversy, so I believed their report that it was not true. A quick scan of the messages on my wall showed a lot of messages but none that I felt like were definitely private messages, so I read the post and moved on.

Then today I started seeing more and more posts from people who are seeing private messages — some of them about sensitive and intimate topics — on their wall.

I Googled again, and tech site after tech site denies this is true — Gizmodo, TechCrunch, Snopes…all of them say that Facebook says it’s not true and they haven’t found evidence to the contrary. HuffPost is the only one who includes a quote from Facebook reps in other countries admitting there could be a problem:

I’m not sure why these sites that we trust are covering this up, but I’m fairly convinced that there are PMs that have been made public (from 2009 and earlier, although one tech-savvy friend says she sees some from more recently as well) based on the examples people have shared with me privately.

We’re talking really sensitive conversations here, folks — talking about problems with a mother-in-law, friends coming out of the closet (to an individual, not the world as a whole) and more. Many people have treated private messages as just that — private — and to see them now shared publicly is alarming to say the least.

Here’s the thing. You can hide messages on your own wall, but you can’t control anything you may have sent privately to someone else that is now appearing on their wall.

First, here’s how to hide the messages on your wall: 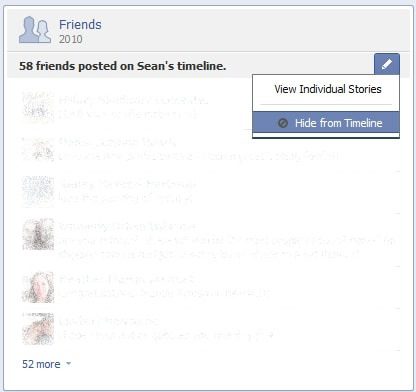 Scroll down to each year on your timeline and look for the block of messages. Some of these may be wall-to-wall posts and, based on the hundreds of people reporting that it includes private messages, some may be PMs.

Click on the pencil icon and select Hide from Timeline. {Just know that, as far as I can tell, this is a permanent change, so you will lose all of the messages.}

Then, you may want to think about anyone who may have received a potentially embarrassing message from you and send them a message asking them to do the same, because you have no control over those.

Have you found private messages shared publicly on your timeline?

Manage Your New Year Resolutions with These Mobile Apps

Cut the cord: how to break up with cable TV

Getting the Most Out of Spotify