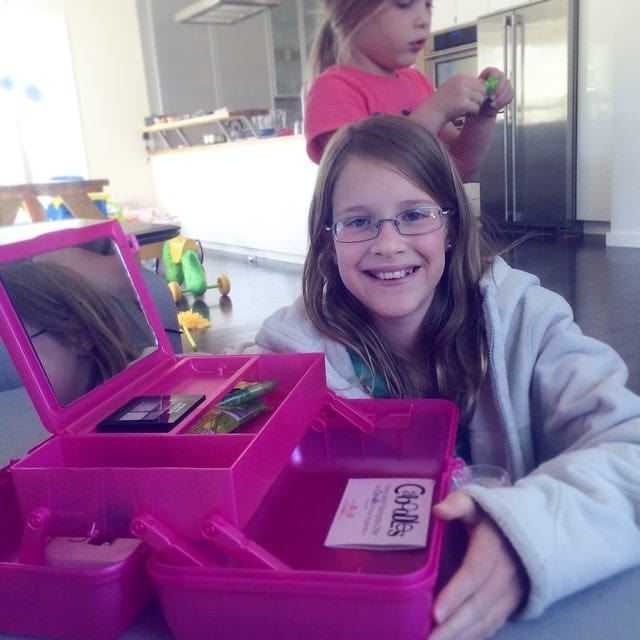 Our oldest (10) has been obsessed with Caboodles lately. This is a fun obsession since I still fondly remember my own pink Caboodle, and I’ve enjoyed watching her plot and plan to get one and fill it with all kinds of fun makeup. They’re not super expensive, so she saved up the spending portion of her May allowance plus some spending money Nona and Pop gave her to finally get it last week. When I shared the picture above, a friend asked if I was prepared for the fight about makeup to follow, and I was thankful to realize that this may be one area where we don’t have any big fights.

I still remember hiding out in the bathroom at school during “after care” with another girl’s Caboodle, trying on makeup and then frantically wiping it off before my mom arrived to pick me up. I was obsessed with makeup, and I would do the same thing before a shower, both in my mom’s bathroom and my grandma’s—wanting to experiment especially with eyeliner but knowing I wouldn’t be allowed.

These days, I wear makeup a couple times a week—if that—usually only when we leave the house (and not always then). I like the way I feel when I take the time to apply my makeup carefully (especially the coveted eyeliner!) and my husband always appreciates it as well, but I don’t feel like I need makeup, an approach I hope to pass on to these girls of mine.

Because of my own sneakiness in this area (which was born out of general curiosity about how makeup worked, not rebellion), I’ve always been pretty laid back about it as a parent.

In fact, we’re very laid back about nail polish. I can’t think of a time when I’ve ever said no to a specific color, and the girls often have multiple colors, patterns or designs on their fingers or toes. It’s just color, and to me painting nails is the stuff that little girls are made of, not a sign of growing up too fast or trying to be something they’re not.

Similarly, while we don’t let our girls “wear makeup” as a general rule, they do have plenty of makeup around to play with—a set of eyeshadow they’ve bought with their own money, a palette of tinted lip glosses, an old blush that I no longer use—and they love to play dress up with it at home. Part of this love of makeup for them comes from having two young aunts (both of our sisters are in their early 20s), one of whom is a hair stylist and was in cosmetology school when they were littler. But I think part of it is just natural, part of how we’re made. In cultures around the world, women and men alike use makeup or body decoration to “dress up” or to signal their place in a tribe or community. 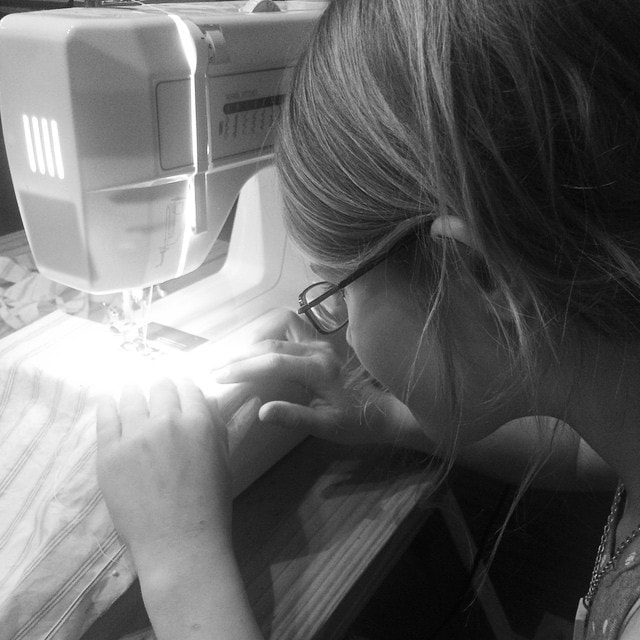 The thing is, this tween of mine is actually fairly talented at fashion and makeup. Even at 10, she applies makeup to her sisters’ faces like a pro, and she’s also learned to sew clothes for both her dolls and herself. (Her real hidden talent is taking a pile of blankets and scarves and weaving them into various outfits—a sari one day, a cape the next, and an elegant evening gown after that, adding makeup to complete the look. Unfortunately, I’m not sure what that talent exactly gets her in life, but it’s pretty fun to see anyway!)

I’m excited to see how her skill and style grow in the coming years, and I want her to be able to embrace those things, not feel like she has to hide them from us.

Here’s the caveat: While our approach is to let them play with it freely at home to avoid the forbidden fruit phenomenon, the girls know they have to take off any makeup (besides a light lip gloss and maybe some sparkles on a special occasion) before we leave the house. Because they do have plenty of time to play and experiment with it at home, and because we homeschool and they don’t face the peer pressure of what “everybody else” is doing at school, they rarely argue or complain about that rule.

For them, makeup isn’t about their self-esteem or trying to fit in—it’s just about the art and the fun and the dressing up. And I hope that’s what it’s always about for them. In the coming years we’ll relax the rules about wearing it out of the house, but no matter how much they choose to wear, I don’t want them to find their worth in “painting their faces.”

But I do think it’s okay for them to enjoy makeup, and it’s not a hill I want to die on as we enter these tougher years of parenthood!

How does your family approach things like makeup, funky hairstyles and fashion?

How to Ensure That Your Baby Is Safe in the Car

How To Enrich Your Child’s Life with Books