During our trip to Florida last month, it became very obvious that our kids were overly reliant on TV and electronics for their entertainment. While they would happily swim in the pool for an hour or two at a time, in between there was a constant refrain of, “Can I play on Nona’s iPad? Can I watch TV?”

Thankfully, when we got back to “normal”, they quickly readjusted to playing and exploring outside, but our screen time was still out of hand, with complaints of “It’s too hot!” and “What can I do?” popping up throughout the day.

We decided to schedule a Screen-Free Week of our own (inspired by the posts I’d seen during the official Screen-Free Week in May), and we gave the girls a few days’ notice and then set a few simple rules: no TV, no computer games (the big girls did still do Teaching Textbooks for math) and no mobile devices (except for audiobooks and music, which don’t really require the “screen” anyway).

We started last Monday, and the thing that surprised me from the first day — and honestly surprises me every time we do a screen-free week — is that they never, not once, asked for screen time. There was no whining, no begging to use my phone, no complaining. Not even when we met some friends at the park last week and they were taking turns playing an iPhone game!

It’s often said that boundaries provide freedom for children, and I think that is exactly what happened for us. Because they knew the electronics were not an option, they simply didn’t think about them; instead pouring their energy into exploring and creating. There were very few times when someone complained of being bored, and they rushed outside each day without question. Honestly, it was awesome! 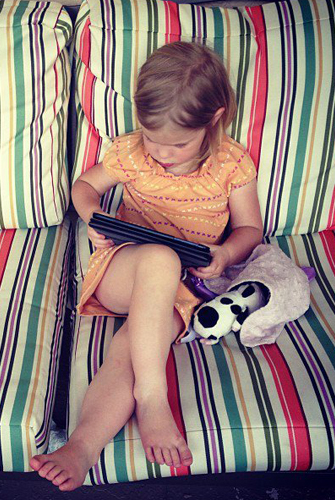 While I was tempted to declare our home screen-free permanently after seeing how much of a difference it made in their play, I decided not to because 1) I’m not a fan of extremes in general, preferring moderation instead, and 2) my TV-loving husband would never agree to get rid of our satellite service.

What I realized, though, was that we needed better boundaries on a daily basis so that the girls didn’t have to spend their time wondering when they’d be allowed to watch TV or jockeying for a chance to play on a specific device.

With that in mind, we decided on these very restrictive rules:

30 minutes of TV before bed (after 7 p.m.)
We’ve found that the earlier they watch TV during the day, the more it affects the rest of their day, so before bed seemed like the most logical choice for our family! The girls enjoy watching the same shows together, which is good because our TV is in the main living area of our home, so there’s really no way to give them individual TV time anyway.

20 minutes of game time on a computer or device
On the other hand, computer time is something they can do individually, so they each have 20 minutes to play per day. We were going to do tokens that they could redeem for their turn, but we’ve found that it’s been simple enough to keep track of who has or hasn’t played each day, so there’s no reason to complicate it with something else to keep track of!

Surprisingly, the girls didn’t complain about the new rules either. They were happy to have some screen time back in their life, and I think they were relieved to no longer have to ask a million times during the day! Another surprising benefit for me is that when someone asks me if they can use their 20 minutes for the day — whether it’s first thing in the morning in the middle of the day — I’m no longer hesitant to say yes because the rule keeps that time in check without me having to monitor it!

I’m not naive enough to think that we’ll never have screen-time issues again, and we’re contemplating adding extra screen time to rainy days, but making the connection between boundaries and freedom in this area has been a huge eye-opener for me. And now I’m wondering how else I can apply it as a parent!

Have you done a screen-free week? What screen-time rules do you follow in your home?

Savor the moments and fill your soul

5 Simple Ways to Be a Peaceful Mom