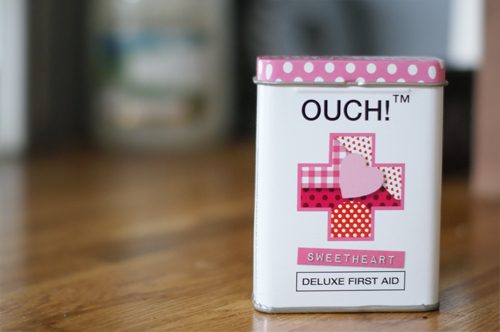 When it come to trying new natural remedies, I tend to take the slow approach. I hear about something probably a dozen times before I really dig in and research it, and only then do I give it a try.

I had just begun to hear people mention bentonite clay when Redmond Trading Company — the company that makes Real Salt, one of our very favorite “green” products — reached out about sending me some review items and possibly doing a sponsored campaign. As fans of Real Salt, working with them was a no-brainer, so I quickly agreed.

When the box of products arrived, I was intrigued by the inclusion of Redmond Clay, a bentonite clay that comes from a natural clay deposit in Utah. Although, I hadn’t really researched bentonite clay at that point, I began reading the product labels and testimonials that came with the package. From stomach aches and weight loss to insect bites and burns, the clay has been used for a wide variety of ailments. And intriguingly, there haven’t been any adverse experiences reported!

We haven’t used Redmond Clay internally too much at this point, but it has already become an indispensable part of our first aid kit for external uses. Our girls call it “mud”, and we use it for pretty much everything. In fact, in many ways, it is our first aid kit!

Be sure to download the free “We Eat Clay” booklet for more information about bentonite clay in general, the unique properties of Redmond clay and testimonials from other users.

Or watch this video to learn more about Redmond Clay:

Here are the ways we’ve used it so far:

The first thing we used Redmond Clay for were the multitude of scrapes and cuts our very active girls inevitably end up with. For example, soon after the box arrived, our two-year-old fell down on our gravel driveway, and her knees were pretty scraped up. We immediately applied a thick layer of the clay, which stopped the stinging. The amazing part about bentonite clay is it actually draws toxins to itself, cleaning out a wound, which speeds up the healing and prevents infection. Because we’re leery of antibiotics, even over-the-counter antibiotic cream because of the development of antibiotic-resistant bacteria, this has become our go-to treatment for scrapes and cuts.

We were able to witness the drawing power in a very concrete way a couple of weeks ago, when the same two-year-old scraped the end of her big toe on my mother-in-law’s driveway. It was very sore, and my husband said she limped around for most of the evening until they got home. There was a lot of dirt and grime embedded in the scrape, and rinsing it with water didn’t seem to help, so I covered it with clay and wrapped it in plastic wrap for about an hour (the plastic wrap keeps the clay wet so that it can continue to work without drying out the skin). When I rinsed the clay off, I was amazed by how clean the scrape was, and she stopped complaining about the pain as well. It healed quickly and easily after that!

On Memorial Day, Sean and I decided to grill out at home. We made the yummiest shrimp kebabs, and I was so anxious to try the shrimp that I reached out and touched the end of the metal skewer…just seconds after it came off the grill. I’m a bright one.

I burnt my index and middle finger as well as my thumb, and it looked like they’d been branded by the round end of the skewer. I immediately ran them under water, but even the heat outside was too much for my sensitive fingers, so I then wrapped them in cool cloth. After we ate our lunch, I remembered that Redmond Clay could be used on burns, so I slathered my fingers with the clay and wrapped them in plastic wrap. The cool clay immediate removed the pain, and when I rinsed the clay off a couple hours later, the pain was gone.

As someone who burns myself regularly in the kitchen (I am a klutz if ever there was one!), this may be my favorite use for the clay!

This year has been the worst yet as far as ticks on our property. We find literally dozens per day — mostly scaling the walls or hanging out in somebody’s hair — and on the occasion that they attach themselves to the skin before we remove them, they can leave an itchy scab behind. The clay relieves that itching, as well as the burn from bee stings and the itchiness of mosquito bites. I’ve even started using the clay instead of the classic baking soda paste that we’ve used for bee stings in the past.

The amazing parts is that these uses really do just scratch the surface of possible uses. It’s been successfully used to treat diaper rash and acne, athlete’s foot and eczema. And because it’s a 100% natural product — the powder is literally the ground clay, and the gel is made from the powder and water (nothing more!) — that’s safe to use internally as well, I don’t have any qualms about trying new things as they pop up!

Have you used bentonite clay for first aid? Have you tried Redmond Clay?

How To Determine The Air Quality Inside Your Home

The Health Benefits of Lemon Water