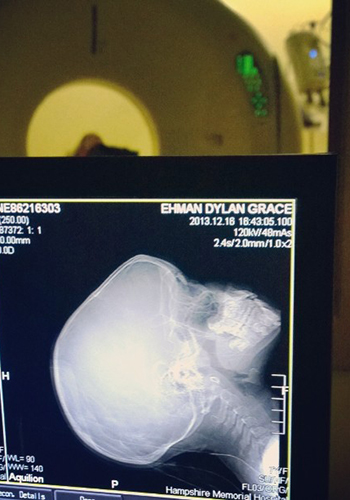 ER trips always happen when you least expect them.

I know that’s obvious — they are, after all, called emergencies for a reason — but on this particular wintry day, the girls were having the quietest afternoon quiet time they’d had in a while — the big girls were hanging out in the loft reading books while the little ones played in the kitchen — and it all seemed pretty perfect.

Until, suddenly, as I was standing in the kitchen preparing a cup of tea, I heard a crash. Only this wasn’t the typical loud crash followed by crying; it was a loud crash, followed by more loud crashing. As I raced up the steps — moving to the side so Sean, who had also jumped up with the first crash, could pass by me — the crashing continued. And the wailing began.

I just knew that somehow the Ikea wardrobe that holds toys and school supplies had come out of the wall and landed on the girls. What else could be the source of all of that crashing?

But when I got to the top, the only thing that seemed to be out of place was a ladder, which had obviously fallen (or been knocked over).

As I was trying to reconcile the crying and the crashing with what I was seeing, our oldest walked around behind our 7 year old…and gasped sharply. I looked down to see a blossoming circle of blood on her head, and we quickly ushered her downstairs to figure out what was going on.

(Somewhere in the midst of this, our four year old — who had been standing on a bucket until it tipped, causing her to grab onto the ladder and knock it over — realized that no one had yet acknowledged her role in all of this, so she began wailing at the top of her lungs from her bed, sending Sean racing once again to figure out what was the matter!)

Because Dylan has the thickest hair of any of our girls, it was really hard to figure out exactly where the source of the blood was, but we finally determined there was a gash there and she probably needed to go to the ER. I bundled up the baby, stuffed a few things in the diaper bag and then my husband drove the three of us to the top of our icy hill so I could take her to the ER. (I could have just let him take her, but ER trips are kind of my domain.)

She was complaining of a bad headache (not surprisingly considering a ladder fell on her head), so the doctor ordered a CT scan, which thankfully was clear. Once he ruled out any serious brain injury, we were able to focus on fixing the 1″ gash on her head. He offered her the choice of getting the two staples with or without numbing the area first (which would have required two shots anyway) so we went without. Although it was painful, it was over in less than 30 seconds, and I think she’s pretty proud of the shiny staples she’s sporting in her head!

All in all, it was an exciting start to our week and hopefully our last ER trip of 2013!

Life {On Love, Disagreeing & Getting Along}