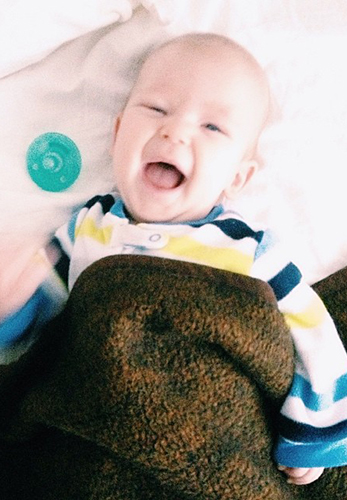 Little man turned 3 months old last week, and we’re starting to see glimpses of how much fun the next few months will be as he’s started giggling at us and interacting a bit more. I am holding my breath waiting for his first belly laugh, although I have a feeling it will be one of his sisters who finally gets him to do it!

A few weeks ago we pulled the swing back up out of the basement, and thankfully it’s provided a place where we can set him down for a few minutes — awake or asleep. I love holding him, and I wear him in the sling for at least two naps a day, but sometimes I just need both arms free to get something done more quickly than I can while wearing him.

His mobile is still his very favorite thing, and the swing has one of those, so he will lay in his crib or sit in the swing and watch the animals move around, talking to them and kicking his feet.

This week he’s started mouthing everything, and he does his best to pull all the things to his mouth, although he still doesn’t have very much control over his arms.

After four non-sleeping babies, I’ve been very blessed that he’s been going 8 hours between feedings at night for more than a month now. He still wakes up a bit in the early morning hours looking for his paci, but I feel like I can pretty confidently call this “sleeping through the night” from a feeding perspective, something that I’ve never been able to do before a year old before!

He definitely seems to know we’re “his” at this point. I love how he leans and scoots to get close to me when someone else is holding him, and it’s fun to watch one of us catch his eye from across the room because he just stares and stares.

Holy moly…this is quite possibly the longest Weekend Reading post ever, but I just couldn’t choose between all of these great posts!

Education {More Than the 3Rs}

Family {For the Mamas…and the Papas}

And just in case you haven’t seen it yet, this maybe the funniest thing I’ve ever seen: The NFL Is Still Hilarious When Subjected To Bad Lip Reading