Head here to see Katie’s post for this week.

And be sure to join us every Monday for our Weekly Reads!

I got a great start on my reading list for the year, in part because I started with The Chronicles of Narnia, which are short, easy reads. But hey, I’m still counting them toward my reading goal of 100 books this year! 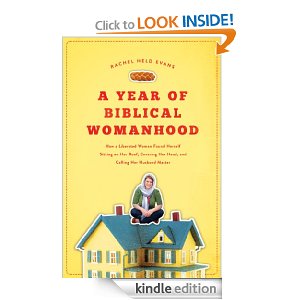 A Year of Biblical Womanhood: How a Liberated Woman Found Herself Sitting on Her Roof, Covering Her Head, and Calling Her Husband “Master”

by Rachel Held Evans
After I posted my reading list last week, a few friends shared a couple links with me with negative reviews of this book. One called Rachel out for false theology and the other for her characterization of biblical womanhood. I had actually already purchased this book on sale, so I decided to move it to the top of my reading list so I could see for myself what all the fuss what about. I’m not quite done yet, but here are my impressions so far:

To me this is a lighthearted, funny look at legalism within the church. I am not reading it for deep theology, and while there are a couple places where I disagree with Evans takeaways, I think the criticisms may be taking it entirely too seriously. That said, if someone were to read it for its theology, I can see how the creative liberties Evans took could cause problems. However, I think she makes it fairly clear where she’s coming from in the introduction when she says, “I think this is why, despite the fact that I vote for Democrats, believe in evolution, and am no longer convinced that everyone different from me goes to hell, I don’t mind being identified as an evangelical Christian,” so I’m not sure that the areas where her theology differs from mainstream Christianity should come as a surprise to anyone.

To be honest, I think the other criticism — that she misrepresents the biblical womanhood movement — is self-serving. While Mary Kassian may have coined the term and be part of the official movement, Evans descriptions of biblical womanhood match my experiences and impressions very well (that homemaking is a woman’s highest calling, Debi Pearl is one of the figureheads of the movement, etc.), and I think Kassian’s frustration is based on those widespread misconceptions and should not be held against Evans or this book.

I didn’t love this book, but I did find a few good nuggets, and I especially enjoyed reading about the Jewish perspective on Proverbs 31 and the “woman of valor”. 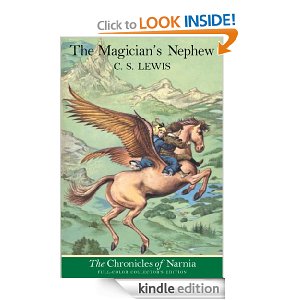 by C.S. Lewis
Although I read The Lion, the Witch and the Wardrobe when I was a kid (and even received the box set as a gift one Christmas), I’ve never read the whole series, which was giving poor Amanda a panic attack. It’s only been in the last year or so that I’ve really started to enjoy fantasy books, though, and I think now is the perfect time to be reading these!

It took me a while to get into The Magician’s Nephew, but I loved the second half of the story, and our oldest daughter (who is reading it now as well and has listened to the entire series on tape) and I have had a lot of fun talking about the characters and what they represent. I also highlighted a ton of quotes in this one, and I’m dreaming of a “Wisdom from Narnia” wall in the girls room!

While the story was not new, I enjoyed reading The Lion, the Witch and the Wardrobe as an adult, and Lewis’ descriptions in the second half of the book (from the beginning of the thaw through the resurrection and crowning) were so beautiful I reread many of them twice!

Of the stories I’ve read so far, The Horse and His Boy is my favorite. While the allegorical elements are much fewer, the story was exciting from the first page to the last, and I especially enjoyed Shasta’s encounters with the lion.

You were right, Amanda — why’d I wait so long?!

Pairing my reading time with my exercise time (on a recumbent bike) has been really good for both of those goals. I like knowing there’s one sure way for me to have time to read and not having to choose between exercising and reading (because let’s face it — reading would win!). Here are the books I hope to tackle this week:

We haven’t done many read-alouds as a family so far this year, but we listen to a lot of audiobooks, which has been a great solution for our family during busy weeks/months! 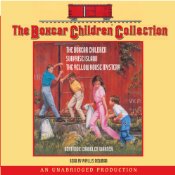 From Peyton (8): “I like Jesse because she can make apple pie!”

From Dylan (6): “I like when they find their grandpa!” 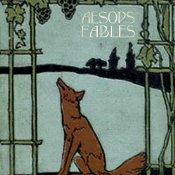 Aesop’s Fables
Our oldest is really enjoy Aesop’s Fables (which were my favorite when I was a kid as well!), and she’s even started writing her own, complete with a moral at the end!

From Peyton (8): “Some of them have morals at the end, and some of them don’t, but I can think of morals for the ones that don’t.” 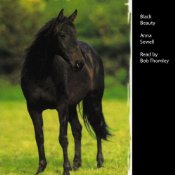 Black Beauty
Black Beauty is the classic story written from the perspective of the horse rather than the human and I’ve heard Peyton — who is currently obsessed with horses — describe it as “the best horse story ever“ to a few of her friends.

From Peyton (8): “Black Beauty is about a horse who was born in a field, and he was bought by a man, and they named him Black Beauty. The horse tells the story of his life. Sometimes he was happy where he lived, and sometimes he was not. He was sold 7 or 8 times. In Emily’s Runaway Imagination (from Beverly Cleary), Emily Bartlett’s cousin Mirial, who lives in the city, reads Black Beauty, so I was really excited to hear what she read!”

Why I love Liane Moriarty’s novels