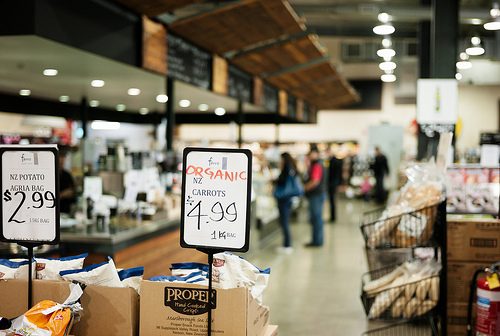 This month’s Eat Well, Spend Less theme is all about back-to-school, with plenty of menu planning tips, meal ideas, and more.

As part of my commitment to simplifying for fall and putting some better routines and discipline in place for our family, I decided to go back to menu planning for a full month at a time rather than doing it weekly like I’ve done for the past year or so.

When I did this before, I was struck by how much easier it was to just plan for four weeks at a time and duplicate that plan from month to month, and I can’t honestly say why I stopped doing it!

How to Create a Monthly Menu Plan

With that in mind, I sat down last week and created a four-week menu plan for September, and — as I expected — it really didn’t take much longer than creating a meal plan for a single week.

I pretty much repeated our breakfast and lunch plan from week to week, with a little variation just so we don’t get tired of it, so that part was really easy. I then started dragging dinner entrees to my Plan to Eat calendar, and I realized that I had plenty to give us a good variety of meals for 5-6 weeks. For some reason, I feel a lot less inspired when I’m creating a weekly menu plan, and I thought the problem was that we didn’t have enough meals in our rotation!

I scoured my Dinner Entrees and Must-Try Side Dishes boards on Pinterest to add at least one new recipe each week as well.

Because it’s hard to say exactly what each week will hold (and because we get take-out pizza every Thursday when our local pizza joint offers large pizzas for $5!), I scheduled five dinners for each of them, dropping them all on Sunday on the calendar. I’ll move those to specific days as each week gets closer.

Before doing any of that, though, I duplicated September’s meal plan to October. I’ll still be able to make changes — adding new recipes and adjusting the plan based on what we do or don’t like this month — but I won’t have to start from scratch when the time comes to create next month’s plan.

My husband thinks that the perishables and forgotten items (for example, I realized today that I should have purchased more EVOO and that we don’t have any tortilla chips to go with the salsa I plan to make) will add up to more than I think. Still, I bought more meat than I typically do — including four pounds of bacon, which I almost never buy because of the cost! — and I was still so far under budget, so I’m not sure he’s right. I also think the menu plan will end up lasting six weeks as we “eat down the pantry” at the end of September! I’ll have to update at the end of the month once we see how that plays out.

The other thing that’s contributing to the lower cost is that I plan to make many of our pantry staples from scratch (ironically, I wasn’t able to do this consistently while writing Easy Homemade because I spent so much time testing recipes!), and planning for the month made it easier for me to figure out how much I need to make of each of those as well.

Besides the time I saved grocery shopping (and the fact that I’ll now be able to just make a quick run to the store each week after church rather than a full shopping trip) and the seemingly lower cost, shopping for a full month means that I can prepare more ahead of time. For example, I went ahead and browned all of the ground beef I purchased as soon as we got home and froze it in one-pound portions, and I also made a quadruple batch of sausage balls and two-quart jars of applesauce. Next weekend I plan to make large batches of pasta sauce, peanut butter, and salsa as well.

Additionally, I’ve been intimidated by the idea of finding a local source of grass-fed beef and free-range chicken because it would mean one more errand to run each week, which is just too stressful to consider at this point. However, the monthly plan makes it easy to see how much meat I need for the full month, which makes that a lot less intimidating. My plan is to try making an extra stop next month to buy those locally since finding new meat sources has been one of my food goals for quite a while now!

I’m not sure I’ll ever do a full once-a-month freezer cooking session, but planning and shopping for the month offers many of those same benefits, and our plan is to stick with this method for the foreseeable future!

For more back-to-school meal planning tips, be sure to visit the other Eat Well, Spend Less bloggers:

What’s your biggest menu planning challenge? Have you ever tried planning for a month or more at one time?

Organize Your Grocery List with These Free Printable Shopping Lists