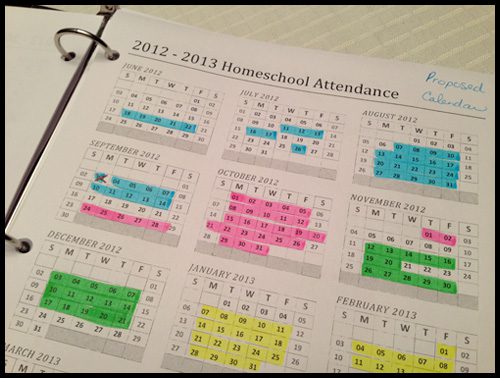 The following post is from Angie of Many Little Blessings: Planning a Homeschool Calendar with Six-Week Terms

I felt stuck in a traditional homeschool calendar mentality when I began homeschooling. While I thought year-round schooling sounded like a good idea, I just couldn’t imagine giving up our long summers. However, having taught for two years at a school with a “balanced calendar,” I could definitely see the possible benefits for our family.

During this school year, our fifth one homeschooling, I decided to go with an option that would combine the traditional school calendar with a little bit of a year-round calendar feel. We decided to break up our school calendar this year into six terms, each of which is approximately six weeks long.

Change is difficult to make, but my whole family can now agree that the six-term approach to homeschooling has been a very positive change for us. If you’ve been having trouble using a traditional school calendar, but are also not sure that you want to use a year-round approach, you might find that a six-term calendar will work for your family.

How We Planned a Homeschool Calendar Based on Six-Week Terms

While we are, obviously, learning all year round, I set up a 180-day calendar for our schooling based on our state’s requirements for attendance. When I set up our calendar, I first looked at any major holidays or other times during the year when I knew that we would want to have some time off. I made sure that those times would coincide with our break times.

After deciding when we wanted to have time off, I sat down with a calendar that was set up from June through May. I played around with different configurations of how to make six-week terms fit into the calendar.

My final planning calendar had us doing our official schooldays approximately as follows:

If you are in a state or country that requires attendance records for your homeschooler but would like to move away from a traditional school calendar, you might benefit from our six-week/six terms approach.  However, here are some other alternate school calendar ideas based on public schools that practice year-round schooling:

Of course, even if your state requires attendance records, it doesn’t mean that you have to follow any set calendar.  One of the biggest benefits of homeschooling is that you can do what works best for your family.  Your family might do best when you have a more flexible calendar, or you might thrive on a rigid calendar. Either way, homeschooling can afford you those options.

If you are a homeschooler, what does your school calendar look like?  Does your state or country require attendance records to be kept?

What You Need to Know About Getting an Organizational Management Degree