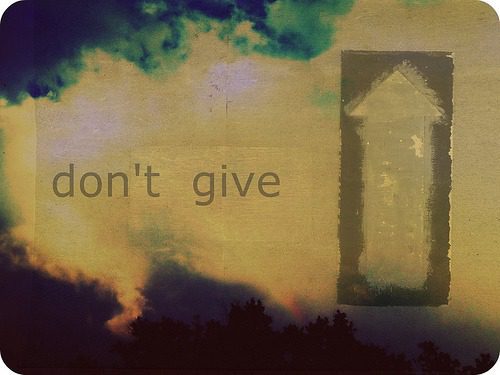 The following post is from Lisa of Working Naked:

Have you ever quit a job, worked with certain clients, or quit a sport or hobby because it took too much time and was no longer fun? If so, does that make you a quitter?

There’s a difference between quitting and being a quitter.

When you quit, you give up because you’ve exhausted all of your options and realize it’s time to go in a different direction.

You’ve spent time, money, and emotion trying to succeed, yet you keep running up against a brick wall. At some point, enough is enough, and you quit.

You don’t ask for or listen to anyone’s advice when you’re a quitter. You’re stubborn and won’t try to do things any other way. Although friends, colleagues, and maybe even clients try to help you, you’ve checked out and moved on to something else. That’s being a quitter.

Sometimes quitting is the only option.

Before I started my own business, I was in the corporate world, working for a boss who was protective of company information and made sure that anyone who worked for him knew just enough about the company to do his or her job. He made every project seem like a stealth mission for the CIA, full of unnecessary secrets that only he knew and rules that he changed as needed.

When I realized that my boss wouldn’t change how he managed his staff, and the next position up the corporate ladder was his job, I knew it was time to quit.

Being a quitter isn’t always the best option.

A co-worker in the sales department of this same company left the company a few months before I did. The company changed how it paid commissions, and he thought he was going to make less money. In fact, he had the opportunity to make more than he had ever made. His bosses tried to convince him that the new commission structure would put more money in his pocket, but he wouldn’t listen. He became a quitter.

When is it time to quit?

Some entrepreneurs I’ve met say that they’ve made a pact with themselves. They’ve promised that when they stop enjoying what they’re doing, and their business turns into a dark cloud over their head, they’ll quit and do something else. They’re not A quitter…they’re being realistic. A business owner who lacks passion for his or her business is going to have a hard time succeeding, especially when the business requires long hours.

There are other options.

If you don’t want to give up your business completely, you can phase out a division of your company or discontinue a product or service that no one wants anymore. Sometimes offering a product or service isn’t worth the frustration it causes, and it’s better to let it go.

When I quit my last corporate job several years ago, my family and colleagues saw me as a quitter, while I considered stopping what I did. They couldn’t understand why I would give up a high-paying job to start my own business.

All I can say to them is that I’m proud of myself for stopping. How else could I spend my days working for myself and doing what I love?

Have you ever quit something or ever considered yourself a quitter? Please share your comments below.

Control the Theater in Your Mind