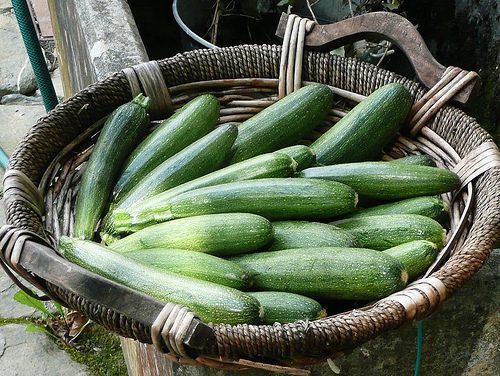 The following post is from Katie of Kitchen Stewardship: Do You Eat Genetically Modified Foods?

People criticize me a lot for my casual stance on genetically modified foods.

Don’t get me wrong, I hate the idea of humans messing with the genes of any other living thing, and I think it’s totally wrong from a “gut feeling” perspective…But I don’t have an active “No-GMO” policy in our household, and that drives some people up the wall.

We actively avoid some GM food. For example, I do prioritize organic corn tortilla chips and corn for cornmeal. That’s an easy step for our family since we don’t have any soy, canola, or much beet sugar in the house. There aren’t a lot of other GMOs to worry about until we go out to eat or have someone else’s junk food.

And at that point, GMOs are the least of my worries.

I try to be informed about what I am and am not informed about. A lot of people at Farmer’s Markets are asking the question, “Are these GMO?”

I hate to judge, and I’m honestly so happy that genetic modification is finally becoming a known term in our culture (and has some bad press to boot). Still, sometimes I think they are just using a buzzword they barely understand.

If someone knew much about genetic modification at all beyond, “I hear that ‘GMOs’ are bad!” they would have seen the list of genetically modified food currently produced in America:

It’s not as many as I expected when I finally started educating myself.

I tried to explain that to a fellow shopper at the market a few weeks back when he asked a young salesgirl – who was clearly not the farmer – if they used GMOs.

She answered in the negative, and I chimed in by saying that only corn, zucchini, and summer squash are GM that you’d want to watch for, and none of them were even in season yet.

He seemed unimpressed and a little annoyed with me for butting in, but the gal selling the produce was happy to understand a bit more and thanked me for the info.

Not Asking the Questions

I’ve gotten a little lax at the market myself this summer.

You see, I don’t avoid all pesticides, either. My food is not 100% organic, and although more and more is becoming that way, I just don’t freak out if I have to buy conventional produce, as long as it’s fresh real food, and especially if it’s locally grown.

I’ve just gotten tired of asking the questions, and although my spirits are heavier when I buy zucchini nowadays, I just don’t have the heart to ask the GM question. I guess I don’t want to know because you gotta eat something. For me, for now, GMOs are my “one more thing.”

I won’t ever touch a genetically modified animal, and it freaks me out to the core that GM salmon seem to be an imminent possibility.

I’m ticked off that manufacturers don’t have to disclose when they use genetically modified ingredients because it sure would make it easier to at least be informed about what I was eating.

But overall, I can’t institute a strict “no-GMO” policy right now in our home. That would mean no eating out, ever, probably ditching all our corn chips (since GM corn is taking over everything else anyway, another reason it freaks me out), and throwing out all the candy gifts that loving grandparents give my children (which, I know, should be tossed anyway, but my husband doesn’t believe in being 100% anti-anything. We live an 80/20 lifestyle, and if junk food isn’t in the “20%” compromise, then what is there?).

I’m not saying that I’m totally educated about GMOs, and I realize that plenty of people with more knowledge than me might think that I’m barely a step beyond “using a buzz word that I don’t understand.”

But there’s a reason I don’t understand it all fully.

Every time I start to look into the subject of genetic modification, I get bogged down in contradiction:

It seemed that at least labeling laws should be no-brainers. There’s a new one going on the ballot in Washington state this fall, for example, that would require:

Then I start reading the opposing viewpoint, including:

He’s basically saying that this proposition is the kind of bad legislation that I often gripe about, governmental policies enacted without considering the long-term, far-reaching secondary consequences.

Then again, that’s potentially exactly what genetically modified crops are embodying as well.

What’s safer: assuming something will not hurt people just because it hasn’t been proven to do so in a few decades or forging ahead into a brand new world based on the fact that we’ve already had 40 years of experimentation…sort?

What stance do you take on genetic modification in your food?

Is Silicone Toxic and Is It Silicone Bakeware Really Safe?