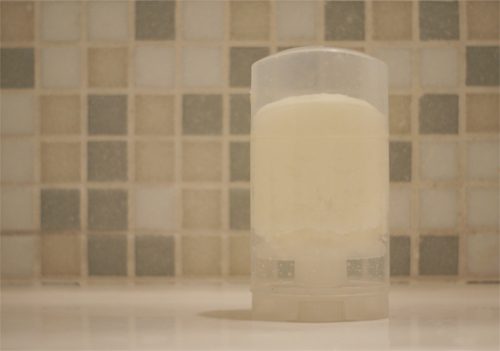 Embarrassing confession time: since having babies, my hormones seem to be a lot more active, and there have been times that I’ve resorted to buying the expensive “prescription strength” deodorant to deal with the excessive sweating and resulting odor. This is especially true in those first few postpartum weeks, but I’ve found my sweat glands to be more active in general in the past few years.

However, deodorant is one of those things I’ve always been wary of. I haven’t really ever worn antiperspirant because the idea of stopping my body from doing something it was created to do doesn’t sit well with me.

There are also many people who believe sweating is one way our body rids itself of toxins; although the mainstream medical community doesn’t support this claim. In addition, antiperspirants also contain aluminum, which may contribute to Alzheimer’s, breast cancer, and other diseases. Even regular deodorant contains many chemicals that I avoid in general, such as triclosan and artificial fragrances.

Frankly, while those connections haven’t been proven, I figure better safe than sorry. For a while, I was simply patting my underarms with baking soda, which is very effective. Unfortunately, it’s also a bit irritating.

Last year I took it a step further and decided to try making my own deodorant. It’s easy, inexpensive and the most effective deodorant I’ve ever used!

Mix the baking soda and cornstarch together in a bowl. Add the coconut oil. Mix well. You can also add essential oils for a more noticeable scent, but it’s not necessary.

Note: If it’s as cold in your house as it is in ours right now, you may need to warm the coconut oil up a bit first to make it soft enough to mix! I recommend doing that on the stove rather than the microwave. Or wait until after dinner and stick a bowl of coconut oil in the oven for a few minutes while it cools.

Store in a jar with a tight lid or transfer to an empty deodorant container.

Coconut oil’s melting point is just 76 degrees. The baking soda and cornstarch will give it a thicker consistency, but you may still want to keep it in the refrigerator during warmer months!

Have you tried homemade deodorant?

If you don’t have the time or the interest in making your own at home, I suggest trying one of the many all-natural, vegan deodorants as an alternative to those packed full of nasty stuff!

Effective Ways for Women to be Healthier in 2020

How to Help Your Teenagers Through a Bad Acne Phase