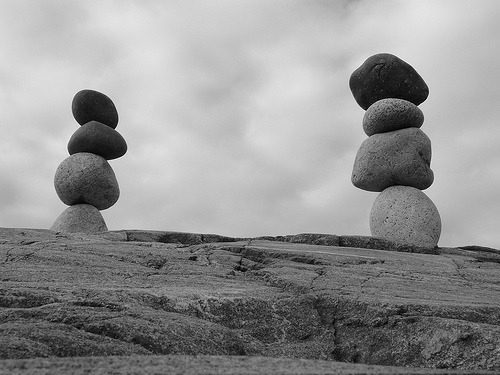 The following post is from Joshua of Becoming Minimalist: Organization: Removing Rocks or Just Moving Them Around?

A number of years ago, I was speaking to a roomful of teenagers on priorities. I shared this story (which originated with Stephen Covey):

A university professor was addressing his new group of business students and, to drive home a point, used an illustration those students will never forget. As he stood in front of the group of high-powered overachievers, he said, “Okay, time for a quiz,” and he pulled out a one-gallon mason jar and set it on the table in front of him. He also produced about a dozen fist-sized rocks and carefully placed them, one at a time, into the jar.

When the jar was filled to the top, and no more rocks would fit inside, he asked, “Is this jar full?”

Everyone in the class yelled, “Yes.”

The professor replied with a little smile, “Really?”

He reached under the table and pulled out a bucket of gravel. He dumped some gravel in and shook the jar, causing pieces of gravel to work themselves down into the spaces between the big rocks. Then, he asked the group once more, “Is the jar full?”

By this time, the class was on to him. “Probably not,” one of them answered.

“Good!” he replied. He reached under the table and brought out a bucket of sand. He started dumping the sand in the jar, which went into all the spaces left between the rocks and the gravel. Once more, he asked the question, “Is this jar full?”

“No!” the class shouted. this time, he said, “Well done.” Then he grabbed a pitcher of water and began to pour it in until the jar was filled to the brim. Then he looked at the class and asked, “Can anyone tell me the point of this illustration?”

One student in the front row raised his hand and said, “The point is, no matter how full your schedule is, if you try really hard you can always fit some more things in it!”

“No,” the speaker replied, “that’s not the point. The truth this illustration teaches us is: If you don’t put the big rocks in first, you’ll never get them in at all.”

“What then, are the ‘big rocks’ in my life?” and “What are the big rocks in your life?” Most likely, your list will look similar to mine – we value our kids, our friends, our faith, our goals, and our influence. This illustration is one that I have never forgotten and have considered often to reevaluate the course of my life.

I have found great benefits to living a minimalist lifestyle. Owning fewer possessions costs less, takes less time, and causes less stress. But the greatest benefit of living with less is that I have found more room in my jar to keep the “big rocks.” My life is centered around the things I value most… and there is less getting in the way of them.

With that in mind… by all means, organize. Embrace the helpful hints, tips, and advice that can be found all over this website. I refer to it often and enjoy being a monthly contributor. But, as you look for organizational tips for your home, don’t make the mistake of just moving around the little rocks in your jar. Find some space in your life for the big ones by removing your unnecessary possessions whenever possible.

What little rocks have been taking up too much of your energy lately?

10 Containers to Reuse or Recycle for Craft Supplies

Organizing Your Way to a Simple Christmas: Shopping