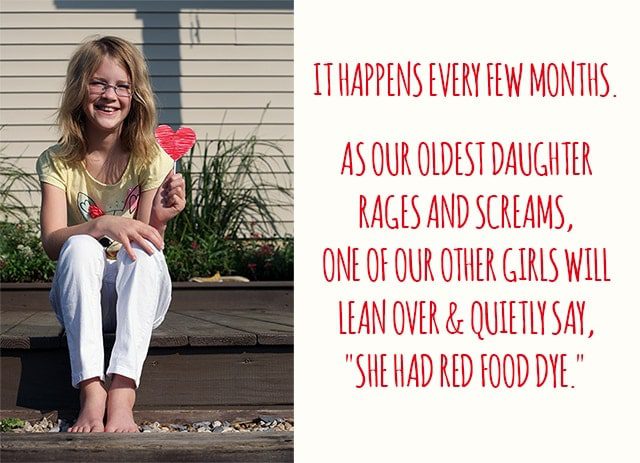 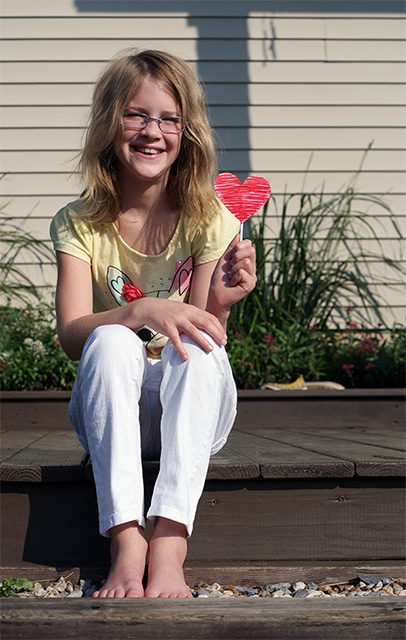 We’re traveling this week and next, so I’m sharing some of my favorite posts from the archives. This one seemed especially timely with Valentine’s Day, and all of it’s pink and red food, coming up this weekend.

It happens every few months.

As our oldest daughter rages and screams, one of our other girls will lean over and quietly say, “She had red food dye.”

Without fail, we discover that the rages are linked to that insidious dye…and yet, if I’m honest, it continues to catch me off guard.

We first made the connection between Red No. 40 and her emotional outbursts four years ago, when her rages were happening once or twice a week. For a while, we did our best to regulate what she ate without avoiding it completely. And then, one day—after she had eaten a red lollipop and after she had screamed hysterically at us, equally upset by the perceived injustice and her own out-of-control emotions—we explained our theory that red dye was the cause. From that moment, she took ownership of it, working with us to avoid red dye.

Occasionally our hypervigilance wears off. The intensity of the rages fade from our memory, and we begin to doubt whether red dye could really cause such reactions. She asks to try something with red dye (typically a treat from a holiday, birthday party, or special occasion), and we say yes. Inevitably, the results are the same, and we all end up paying for that yes.

Then there was the time the rages started up again, almost every day during school. I initially attributed them to a bad attitude (she’s our most precocious child but our most reluctant schooler), then to tween hormones. As they continued, I began searching for some hidden red dye source.

It wasn’t until I was helping our 4-year-old brush her teeth that I realized I had accidentally bought hot pink toothpaste when they were out of the natural stuff we normally buy. It had been so long since I’d purchased conventional kids’ toothpaste that I had forgotten that it came in such colors. The tiny amount of red dye in her twice-daily toothpaste was enough to send her spinning out of control. Within a few days she was back to her normal self.

These days, she almost completely self-regulates, knowing that the way it makes her feel inside is just not worth that red lollipop. If I’m honest, she’s better at spotting the red dye in unexpected places than I am—quietly reminding me of its presence in rainbow sprinkles and checking the juice carton at a family get-together or the back of the Cheetos that a friend offers her at the park. She’s not afraid to tell a teacher or camp counselor that she can’t have red dye, and she does her best to choose to be happy even when she has to turn down treats.

I know red dye doesn’t affect all children the same, because our other three daughters don’t have any trouble with it. And if you’ve never experienced a red dye rage yourself, you might think I’m exaggerating.

But I’m not, and I’m increasingly frustrated by it.

I’m frustrated that Red No. 40 is found in everything from the candy and flavored yogurts (where you might expect to find it) to baked goods, medicines and salad dressings. It’s even found in some chocolate, cheese products and peanut butter-flavored snacks.

I’m frustrated that I have to read every single label of every single thing we buy just to check for this dye and that we can’t occasionally do a fun treat or enjoy food at a party or get-together without worrying about it’s presence.

I’m frustrated that “we” have bought into the idea that all food should be brightly, artificially colored instead of letting it maintain its natural colors. I mean, really, the chocolate isn’t “chocolate-y” enough on its own, so we need to add red dye?!

I’m frustrated that while manufacturers substitute natural dyes or eliminate the dyes altogether in many products in Europe (where they’re required to add warning labels to products containing food dyes), they have not been eliminated here. It’s possible to do so, but it’s not the most profitable option, so they just don’t.

I know from conversations with other people that we’re not the only family who deals with this. But I don’t have any solutions except to keep avoiding it and keep talking about it in the hopes that the manufacturers will get the message.

Has your family experienced a reaction — rages or hyperactivity — associated with red dye?

Working together as a family to keep the house clean