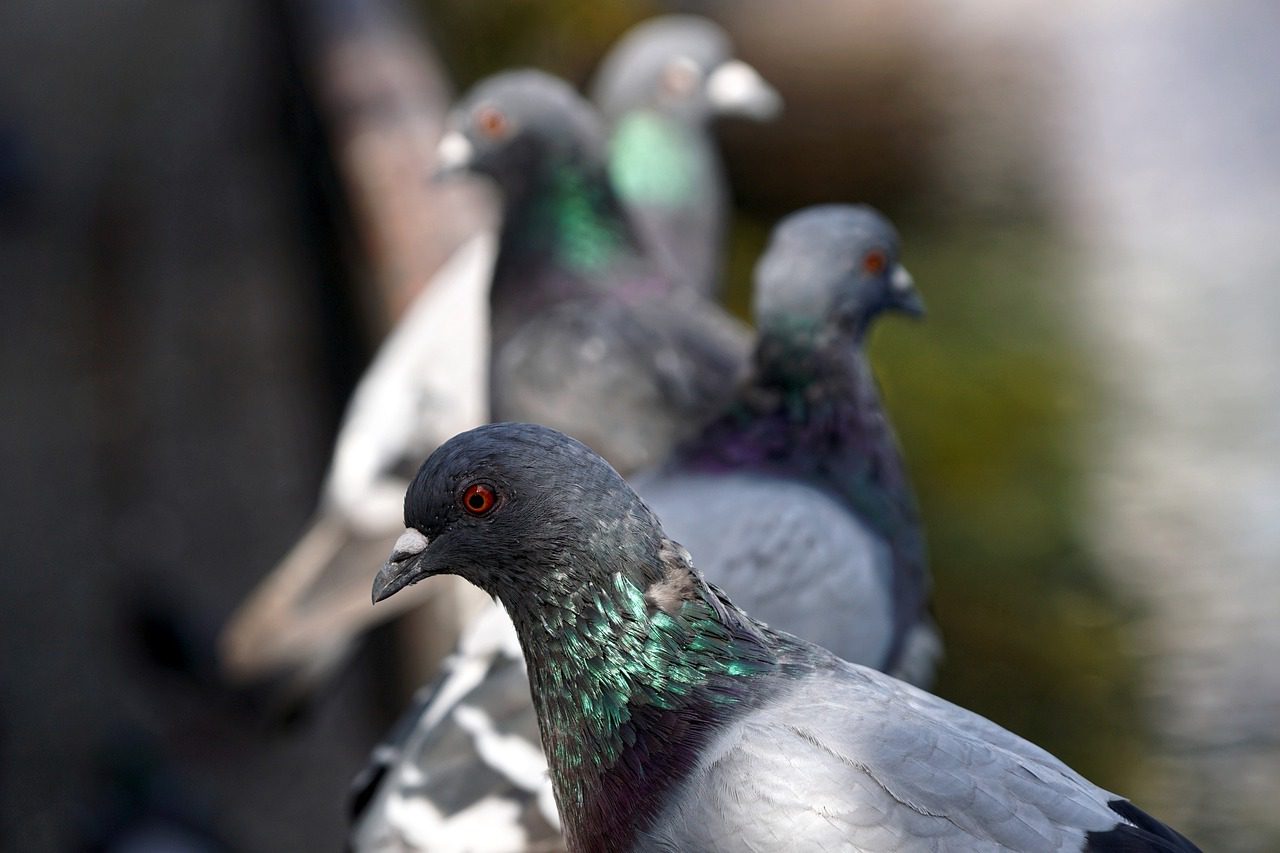 Image by suju-foto on Pixabay

There are various widely recommended home remedies to get rid of pigeons, but a number of these are not that effective in practice. For example, spices such as pepper, cinnamon, and chili powder are touted to repel pigeons, but they’re far from effective. You will need to apply them frequently, too, as they lose their potency and will simply be washed away by rain.

Spraying pigeons with water is another suggestion, but this is only effective for a very short time. However, there are several other home remedies that can be used effectively on smaller pigeon projects.

If you want to know how to keep pigeons away without causing them harm, decoy birds of prey can deter pigeons from nesting. Pigeons are prey for birds like hawks and falcons and are therefore afraid when they see them. That said, even if you initially have success with using predator replicas, you will need to keep moving them around because the pigeons get used to them when they stay in one place and will start to ignore them. Today it is possible to find 3D, life-size predator replicas that emit raptor sounds or move, which may be more effective.

Shiny Mylar balloons, aluminum foil strips, old CDs, small mirrors, and any wind-propelled shiny spinning objects will deter pigeons. Reflective tape works well as it catches the light and crackles in a breeze. Tack strips of tape on vertical surfaces where the pigeons like to roost or hang them on a string, so they flap in the wind. They last for months and are easy to replace. Pigeons don’t like bright flashes of light. Their eyes react to the prism effect, and this can leave them feeling disoriented.

When you place reflective objects on the roof, under the eaves, or on a patio, pigeons won’t feel comfortable nesting near them and would rather choose a peaceful nesting site. As when using decoy predator replicas, you need to keep moving the objects around as the pigeons will get used to them and stop being intimidated by them.

Sticky substances can prevent pigeons from nesting. It is possible to use a non-toxic petroleum-based gel that is clear so it’s hardly noticeable and it stays sticky for a long time. Using a light coat of translucent paste is all that’s necessary. The pigeon will pick up on the smell as it approaches, and as soon as it feels the tacky to sticky effect, it will fly off.

There are some problems attached to using sticky substances. If you apply too much, debris like leaves, small insects, and dirt will get stuck in it, rendering it less effective. It is inconvenient and may even be dangerous to apply sticky substances on areas like roofs.

If you have an unusual amount of pigeons in your yard, it’s likely they have food and water sources close at hand. It is important to remove sources of food and water if you want to get rid of the pigeons. They love berries, grass seeds, and pet food.

Keep pet food indoors and get rid of bird feeders. Make sure any garbage bins are tightly sealed and cover ponds with netting. It can be very difficult to get rid of all food and water sources, but the more you can get rid of, the fewer pigeons you will have.

Trapping is another way to remove unwanted pigeons. Bait the pigeon traps with food like seeds, corn, or millet. Catch the pigeons and release them far from where you live once you’ve captured them. There are many different types of pigeon traps you can use. Double-door style traps work by baiting a pigeon from either side. When the trigger plate is hit, the doors close and trap the pigeon inside.

The problem with trapping and removing pigeons is that they have a highly developed homing instinct. They are likely to find their way back. Trapping also only works on a small pigeon population. Using pigeon contraceptive bait is more effective for a larger pigeon population.

Folklore suggests that using rice can kill pigeons and decrease the local population. The idea is that after eating the dry rice, it will expand in their stomachs, causing them to die. This is a myth as the rice will simply come back out the way it went in, and they won’t die.

Rice may not work to get rid of pigeons, but there are many home remedies for dealing with pigeons that won’t cost you too much and work well if you don’t have too many pigeons to try and dissuade. It may require some trial and error before you find what works best.

Featured Image by suju-foto on Pixabay

Criminal Law and Civil Law: What is the difference?

Can CBD Help in Pain Management?