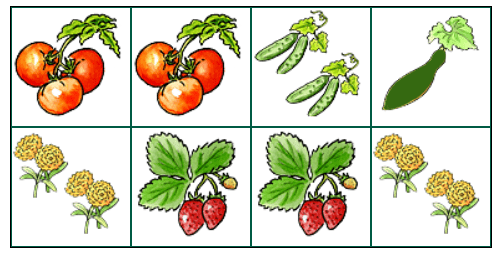 As I was spring cleaning my craft supplies last week, one thing became very obvious: I have a tendency to overbuy for any new project. I get excited and jump in with both feet, buying everything I could possibly need…in bulk.

This weekend, I was planning to buy my seedlings, but I realized that I was doing the same thing. Rather than rushing to buy them when the garden isn’t even ready, I stuck with the soil mix and decided to research layouts, planting times, etc. more before I buy the plants.

I bought peat moss, vermiculite and compost at Lowes and mixed them together to fill my garden box. Then, I marked the squares with string.

Based on the concern that some commenters shared on my original table top garden post that my plants would be too crowded — and the suggestion that others made to use a trellis across the back for the vine-growing veggies — I decided to go ahead and eliminate the winter squash for this year and just plant two squares of marigolds.

Then I used this very cool garden planner from Gardener’s Supply Company, which also includes tips for growing each plant, and created this layout, which also shows how many plants you should plant per square:

**I’m a little confused by their recommendation of one per square because everything else I’ve read has recommended four per square.

This coming weekend, I’ll probably add the trellis. I may also go ahead and buy the marigolds and strawberries and plant those, but I think it’s still too early for the others since we had freezing temperatures last week. All in all, I like this slow-and-steady approach because I haven’t spent a ton of money, and I’m not feeling overwhelmed or rushed!

Are you growing a vegetable garden this year? What are you planting?

Is Too Much Cinnamon Bad for You?

Add Seasonal Fruit to Your Salads