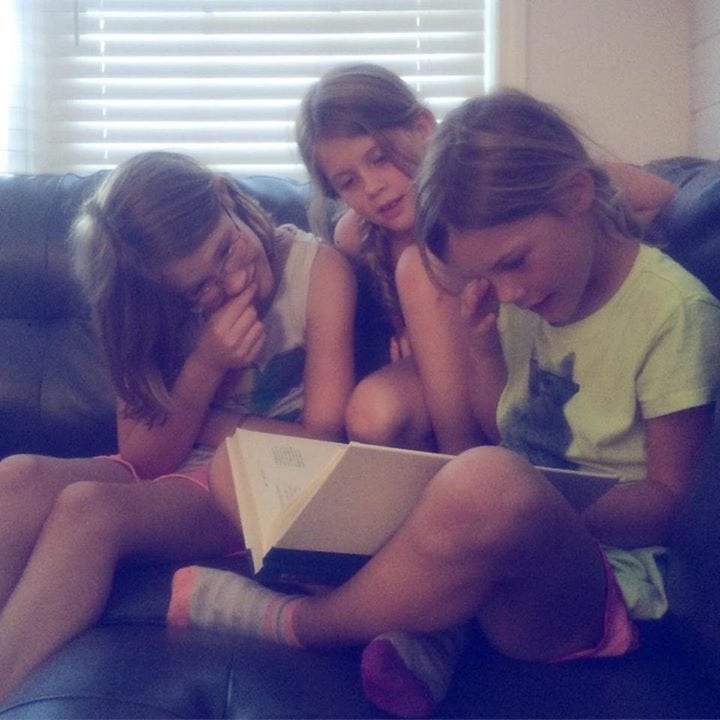 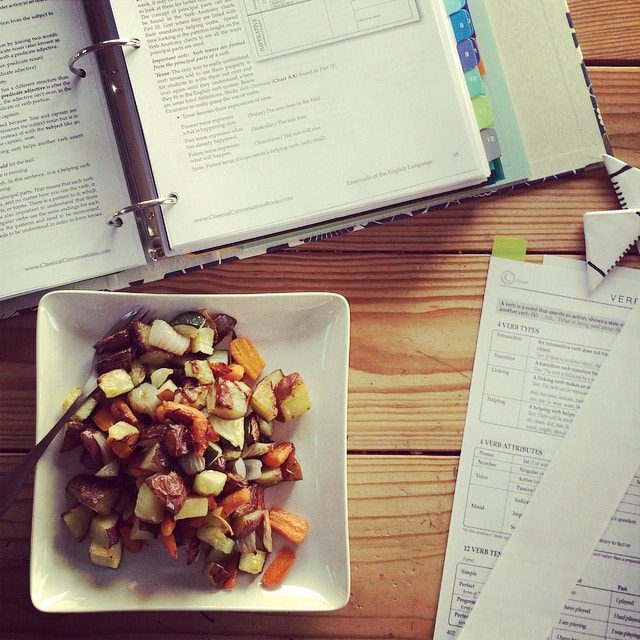 Language arts is one of my very favorite subjects, both as a student myself and as a homeschooler. For that reason, I’ve spent a lot of time considering different curriculum and “perfecting” our approach. (And by perfecting, I mean what we’re doing is working so far for our two oldest…who knows what will happen as the rest of our kids hit middle elementary and beyond!)

First, a little bit about how I learned language arts (which for this post includes reading, spelling, literature, grammar and writing). I attended a Montessori school for 13 years (from 2.5 years old until 8th grade), and I can still vividly remember learning the parts of speech and their symbols—a big red circle over verbs, a big black equalateral triangle over nouns, etc. I can also see the wooden pieces we used for diagramming sentences, although I never really learned to diagram on paper. I learned to read phonetically, but I don’t remember much emphasis on spelling, literature or even writing in school.

In high school and college, I loved writing research papers (but have never really called myself a writer or done it for “fun”), and I’ve always had a pretty good grasp of grammar, even when I didn’t know all of the rules.

When our oldest daughter was a baby, I began working as a general and financial transcriptionist, and I started to learn more about the actual rules of grammar as I worked to properly punctuate the spoken words I was transcribing. I gained a better understanding of the actual rules for semicolons and commas, and—funny enough—I actually fell more in love with the grammar part of the English language.

Which brings me to homeschooling: my goal has always been to give my kids the tools they need to communicate effectively and intelligently through the written word without making the lessons themselves so dry and boring that they simply hated it. There are still plenty of times that my kids groan over language arts assignments, but for the most part the older ones have become enthusiastic readers and writers, which is my ultimate goal.

Based on all of the curriculum we’ve tried and reviewed over the years, my gut feeling is that there are a lot of really, really good options out there, with no one best option other than the one that is best for your family. In a world with unlimited time, I’d probably do them all just because they each bring different strengths to the table. But in the actual world, here are the ones we’ve tried and where we’ve ended up: 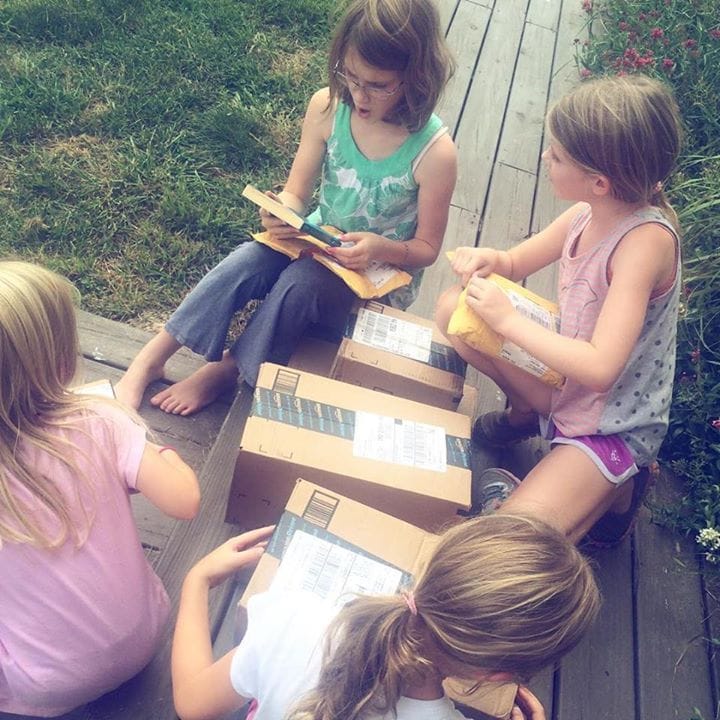 Although our sources have expanded over the years, I can’t write a post about language arts—and literature especially—without mentioning Sonlight. While the curriculum as a whole does not work for our family, I am so very thankful for their book lists, and I’d say that a majority of our books have come from these lists until just recently, when I started choosing more based on personal recommendations and our girls’ interests.

I’ve tried several different methods for teaching my girls to read, but at the end of the day, the Explode the Code series of workbooks is the one I fall back on! For us, it just works—my girls enjoy these workbooks and can work on them fairly independently once they learn to blend sounds, and they walk through various phonics rules very systematically.

We typically add the early BOB Books readers (I’m not really a fan of the more advanced sets) and a few Sonlight readers as well.

I absolutely adore the First Language Lessons series from Peace Hill Press. It’s a really sweet, simple program that I think lays the foundation for all of the language arts subtopics.

We work through the first two books in this series in conjunction with our CC memory work, but we take our time and don’t go much further since I know the rest will be covered in Essentials. I appreciate that this program includes not just definitions of various parts of speech but practice using them properly, memorization of poems, and some light dictation, copywork and retelling of stories. It’s also very manageable and takes just a few minutes each day.

We’ve also tried the Writing with Ease program, but we found it to be a bit redundant and overwhelming when my girls were little. Instead, we’ve waited until 3rd grade to start formal writing assignments with all of them, easing into it with our Story of the World summaries in 3rd grade and then jumping into Essentials with both feet in 4th grade.

Our family first joined Classical Conversations five years ago, as much for the community as the curriculum. At the Foundations level, language arts is limited to the memorization of English grammar rules and patterns, and while I consider that a valuable exercise, it’s never been enough for us, so we’ve always layered additional resources on top.

However, the Essentials program is really a standalone program. (In fact, while I’ve included Spelling Plus separately below, these spelling words are actually included in the Essentials program) I really, really love everything about this curriculum, and I’m enjoying my second year as an Essentials tutor and seeing how my oldest’s skills have progressed this year compared to her first time through.

Like writing, we’ve always taken a better-late-than-early approach to spelling, and that means that last year my 3rd and 4th graders started using Spelling Plus. I’ve plugged all the lists into Spelling City, and each week they work through one list, doing exercises and games to help them learn the words. Our girls—so far—seem to be fairly natural spellers, so that is enough for them to progress fairly quickly through it, and I haven’t looked into any additional spelling programs

(As a side note, we’re not currently doing any grammar editing work, but I think when our oldest finishes her Spelling Plus lists, we’ll look into the Editor in Chief program from The Critical Thinking Co. as well as the Fix It! Grammar books from IEW to decide how we want to proceed with editing practice.)

If we were not doing the Classical Conversations Essentials program, the Logic of English Essentials program would be my top choice. This program and the philosophy and research behind it are fantastic. Working through these lessons helped our oldest daughter overcome some struggles she was having as a reader by very systematically breaking down each of the phonograms in the English language with its rules and exceptions, and I would pull it out again for a struggling reader.

That said, a lot of it overlaps heavily with the CC Essentials program (especially the grammar), and while I do love language arts, I also want to avoid extra busy work in order to give my girls lots of time to play and explore on their own, so it’s not something we’ve continued with. But I am still a very enthusiastic fan of this program, and I recommend it often because it’s just so very well done.

We’ve also tried the Logic of English Foundations program, which I loved as a parent but was not a good fit for our youngest daughter. I’m tempted to try again now that she’s matured some, but it’s more expensive than Explode the Code (which is now working for her), so I’m not sure it’s worth the switch!

We have not yet used any Brave Writer programs, but I absolutely love Julie’s approach to language arts and homeschooling in general, and I think all of her classes sound fabulous, so I just couldn’t leave this one off the list.

I’m drooling over these classes for my oldest daughter especially, and while Writing a Greek Myth would have been my top choice if it weren’t sold out (she’s on her second read-through of the Percy Jackson series in the last month), I love the idea of the online book club and having her join in for the discussion of Wonder in November:

Similarly, I’ve been drooling over the Center for Lit’s Elementary Literature program, which includes Socratic discussions around monthly book selections. Unfortunately, I’d be lying if I didn’t admit that the price of both of this one and the Brave Writer classes is one of my hangups. It’s not that I don’t think they’re worth the price, but rather that I need to prioritize where our homeschool budget is going and—so far—they haven’t been moved to the top.

How about you? Which language arts curricula do you love? What’s on your wishlist for the future?

A Legacy of Letters