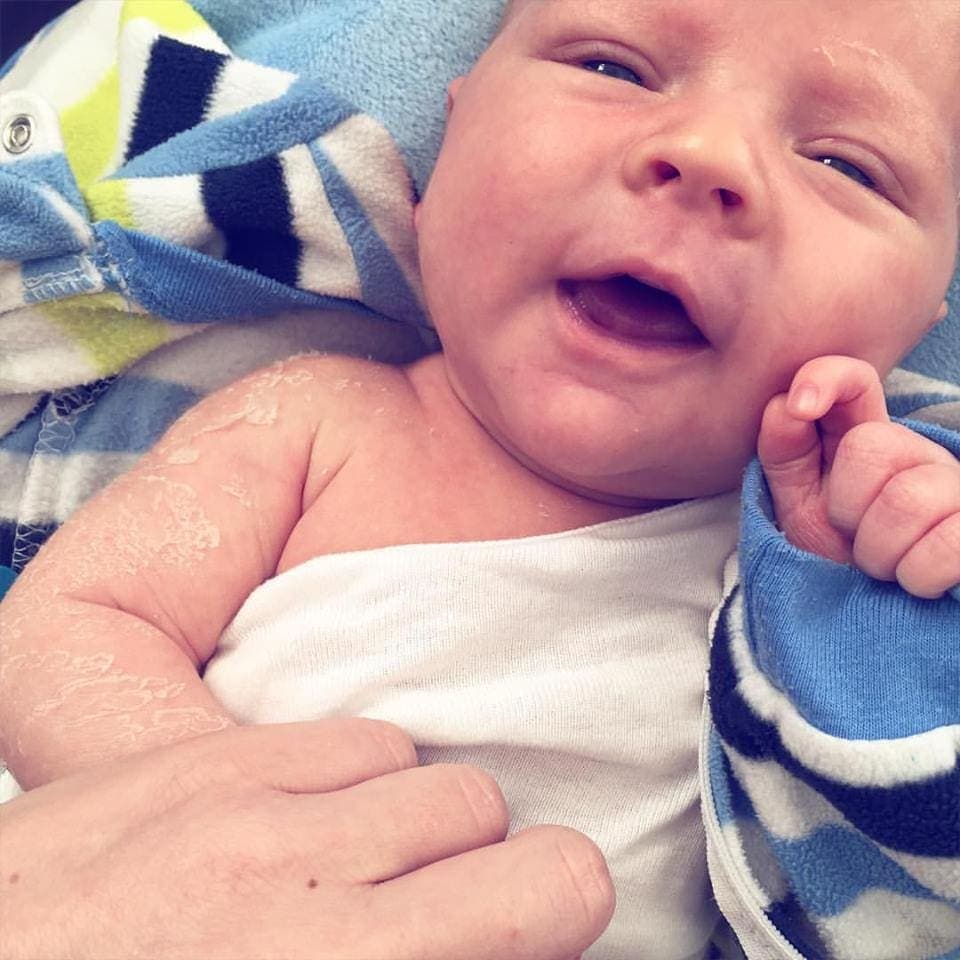 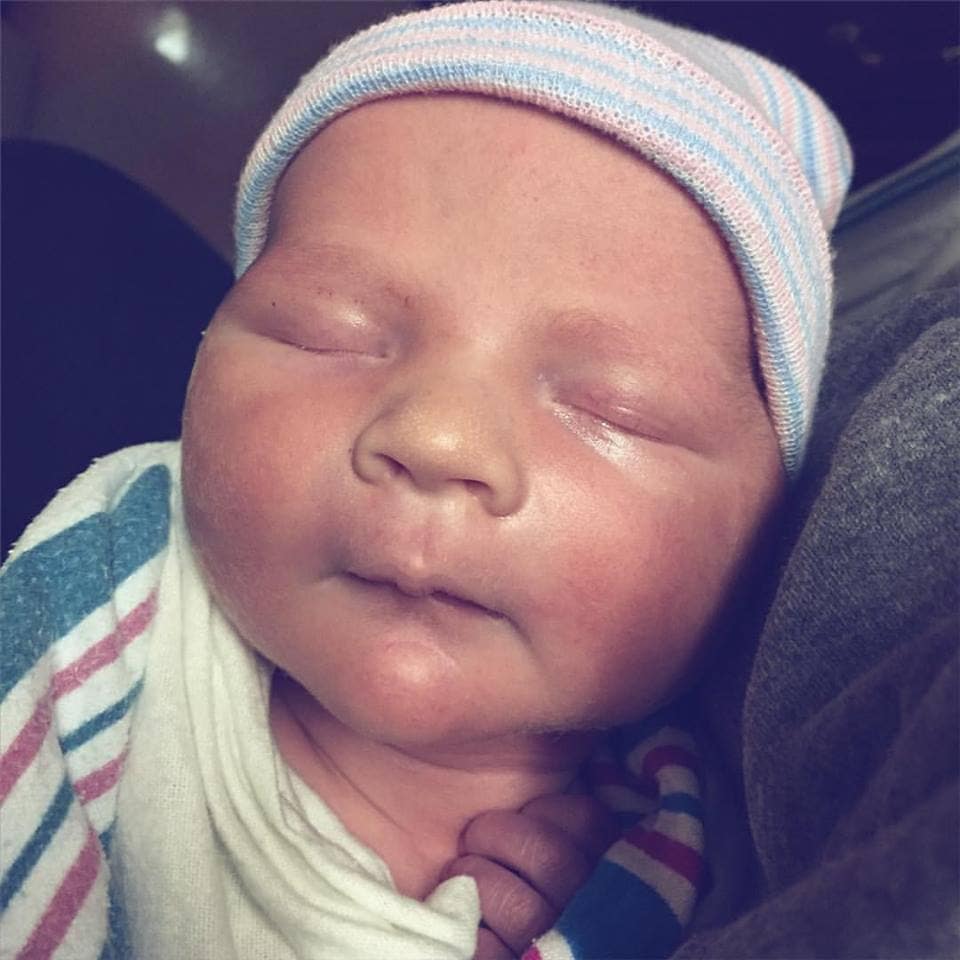 Nothing about Lucas pregnancy or birth was like any of his siblings, and I promise there was one point where I was sure the perinatologist wanted to ask us if we were sure he had the same father as the rest of our kids {yes, absolutely!} because he was measuring so large and all of our other babies have been little.

But the moment he was born, all the trouble of my pregnancy was forgotten. {And, for the record, he looks just like his daddy.}

That said, there were a few things I noted in passing during those long, non-sleeping hours in the hospital the night he was born, most notably that his skin was so dry he was leaving “dandruff” all over me and that he looked so shiny in his first few photos, almost like I was using a flash when I wasn’t.

Twenty-four hours later, we were released from the hospital, and life as a family of eight officially began. 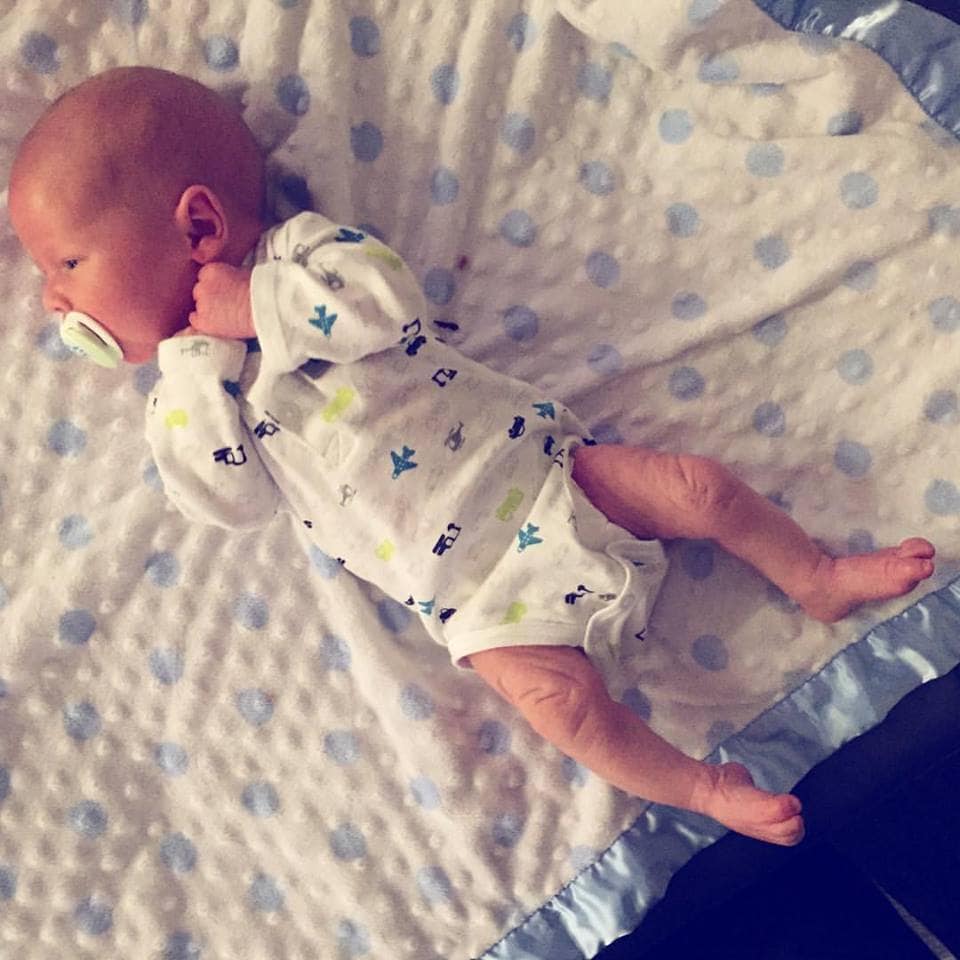 About two weeks later, however, his skin started to tighten up, especially on his legs. They looked like they had a tight plastic wrap or thin paper coating on them, making them look much more scrawny.

Within a week, his skin began peeling from the crease in his forehead outward, and over the next month, he would literally shed his entire skin. 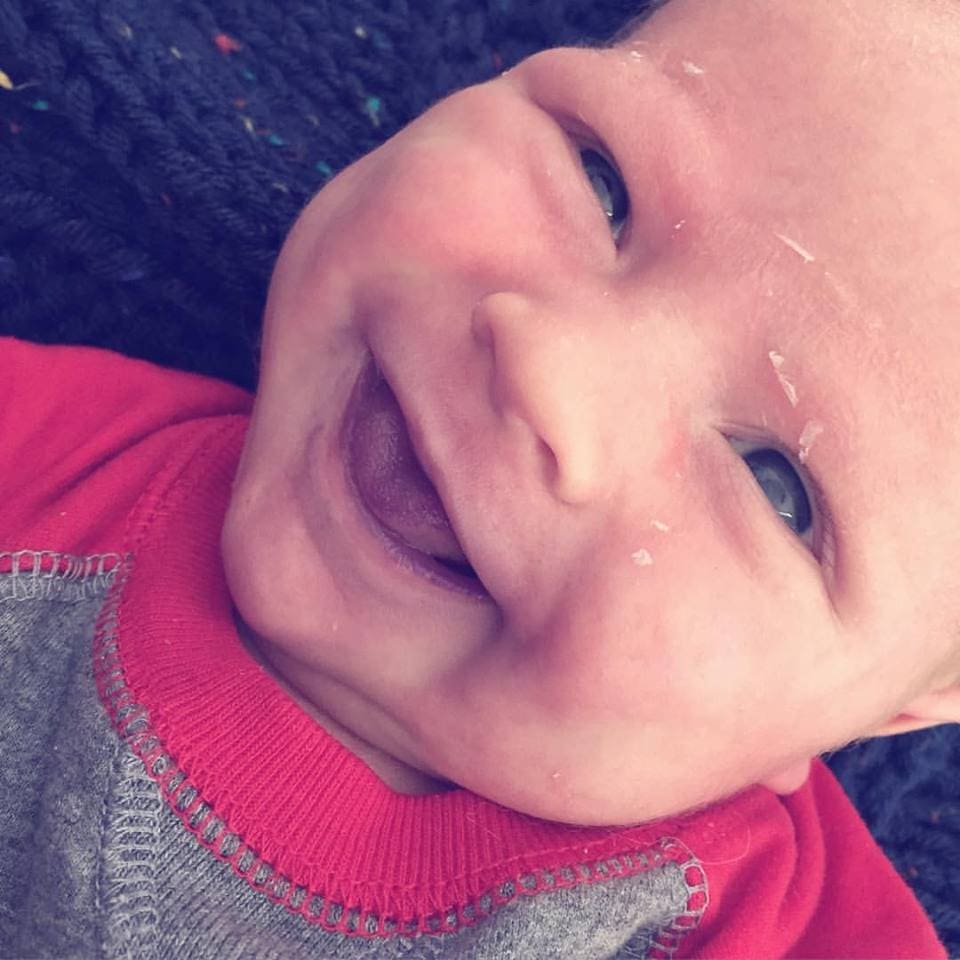 When we went in for his wellness appointment at 3 weeks old, our pediatrician spent some time looking at it. Still, because the skin appeared to be clear and normal underneath the peeling areas, our best guess was that it was just peeling skin from being baked longer than his siblings (although I was only 40 weeks pregnant, it sure felt overdue after having babies at 37-39 weeks in the past}.

As time went on, I noticed that the dry scales were coming back in areas where he’d already finished peeling.

At his 2-month appointment, our pediatrician agreed that it was a bit more concerning and gave us a referral for a dermatologist. Before we left the office, though, she brought a book about ichthyosis. The pictures and description seemed to match, but it said it was not present at birth, so we weren’t entirely sure what to think.

Side note: If you don’t have a pediatrician you love, I highly recommend searching until you find one. We’ve been at the same practice for 10 years now and have seen one pediatrician almost exclusively since she diagnosed our daughter’s ITP, and I consider her a valuable partner and friend in this parenting journey!

Fortunately, UVA was able to get us in with a pediatric dermatologist within a week, and in the meantime, I read everything I could about ichthyosis.

There are at least 28 types of this genetic skin disorder, with the most common being ichthyosis Vulgaris and the most severe being harlequin ichthyosis, which I’m familiar with through Courtney’s blog, Blessed by Brenna.

In some, the body has trouble “releasing” old skin, and in others, the body produces skin too rapidly. They’re all characterized by fish-scale like dry skin or thickened skin, and different versions affect different parts of the body.

The dermatologist felt that Lucas most likely has a severe form of ichthyosis Vulgaris. {And next time we go, I want to ask if the girls’ persistent dry, flaky scalp may be related since it is a genetic disorder.} Definitively diagnosing the type requires genetic testing, and I’m not sure if they’ll recommend that or not since the main goal is treating the skin, and there aren’t any cures anyway.

Lucas may or may not grow out of it as he gets older, but for now, the dermatologist prescribed daily baths with lactic acid to help his skin “release” and Aquaphor to hold the moisture in is already making a big difference. {Although he’s not a huge fan of the process.} 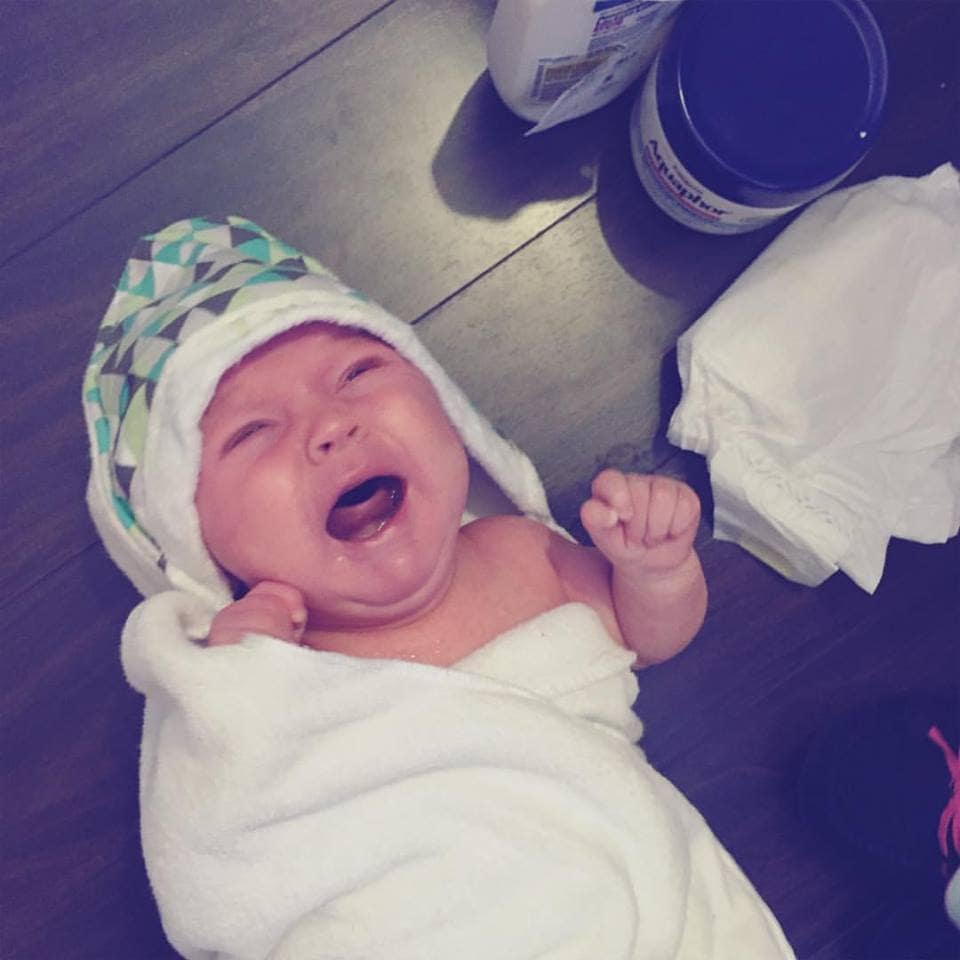 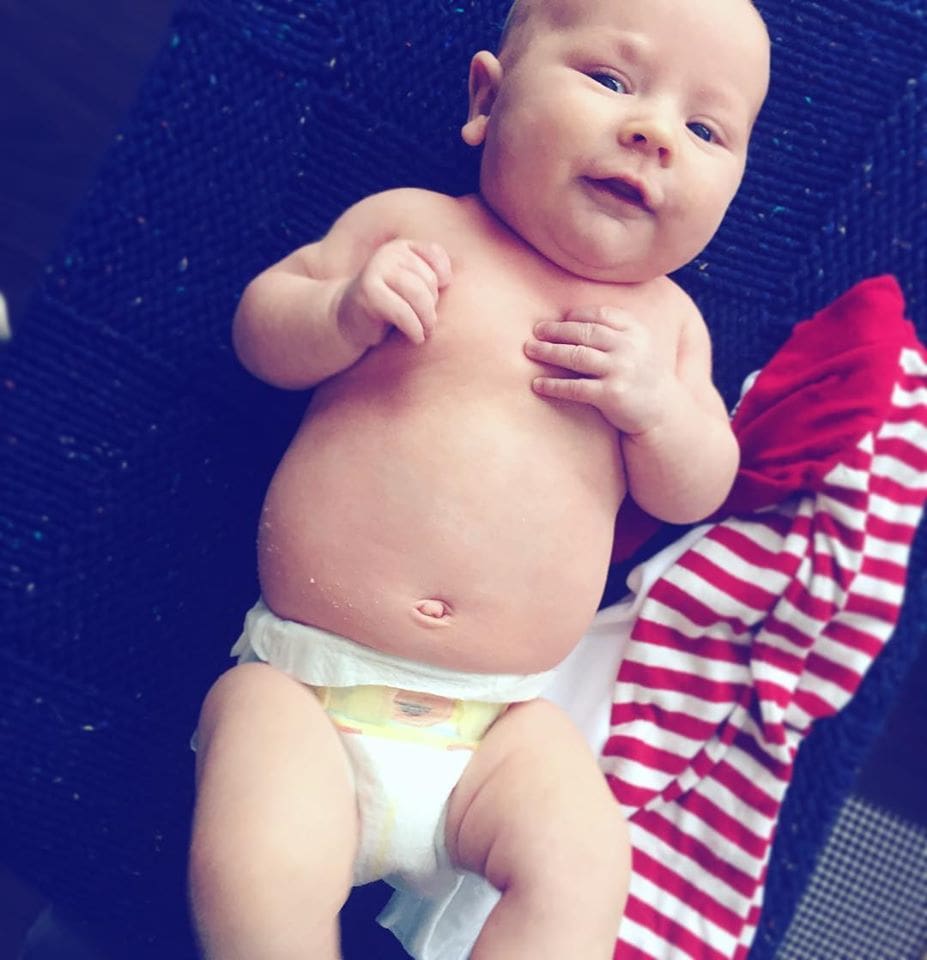 For now, our plan is to continue the daily bath-and-lotion routine. We need to make an ophthalmologist appointment to rule out any eye issues {, but honestly, I’m not too worried about those, so I keep forgetting}. And then, we’ll head back to the dermatologist in 3 months for a follow-up.

As a side note, he also has a dermoid cyst above his left eyebrow, which is unrelated but will need to be removed when he’s older so that it doesn’t interfere with his vision or get infected.

I suppose with so many siblings. He just wants to stand out from the crowd!

Dreams of a Baby Come True with Militta

Where Does the Time Go?