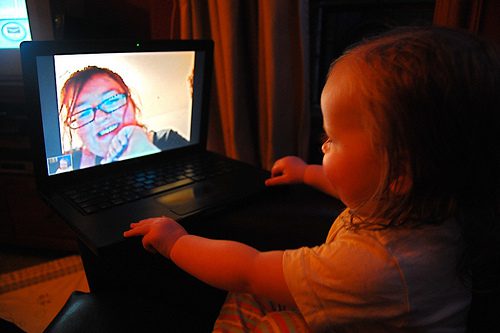 Nine months after we got married, Sean and I sold our condo, drove to Utah, where we knew no one, and bought a house. We found a church and jobs and started to make friends, but we’d left behind all of our family and the friends we’d grown up with.

Neither of us is very good at the whole staying-in-touch thing. We still talked to our parents a lot, and we stayed in close contact with my aunt and uncle in California since they were just a day away, but we slowly started losing touch with other people.

Then, two years after we’d set off on our grand adventure, we found ourselves missing “home.” We’d recently been back to visit, and I couldn’t stand the separation any longer. We made plans to sell our home and move back east just weeks before we found out we were expecting our second daughter.

Since then, technology has continued to grow by leaps and bounds, and staying in touch is easier than ever. I don’t see us moving away again any time soon (although there are times when the beaches of Costa Rica call my name!), but if we did, I have a feeling we’d feel more connected to those we left behind this time around.

Let’s look at some of the ways technology has changed our long-distance relationships:

Cell phones certainly aren’t new — we even had one of those in Utah — but changes to plans and rates make staying connected easier and more affordable every year. Many people use a cell phone instead of a landline, and there’s something to be said for free long-distance and being able to chat with friends and family through various calling plans and from various places.

We also had a webcam while we were living out west, but it was an external camera that had to be set up and attached to my laptop when we wanted to use it, and we didn’t use it very often.

However, built-in PC cameras now make getting face time with friends and family easier than ever. The girls regularly chat with my parents even though they’re only a couple of hours away and we see them in person regularly!

Even if you don’t want face-to-face interaction, internet calls through Skype, Google Calls, and other voice-over-IP (VoIP) services are much less expensive than regular long-distance calling. Tsh from Simple Mom lived overseas for several years with her husband and kids, and internet calls made staying in touch with friends and family affordable for them!

I know many people who use VoIP for all of their long-distance calls to avoid additional charges.

And of course, social media has had a profound impact on relationships. I love how much easier it is to stay in touch with old friends through Facebook, and I’ve had several friends pick back up where they’d left off thanks to Facebook.

While there are people who decry social media’s influence on our lives, I love connecting with people through sites like Instagram and Facebook so that I can read and see not just the big milestones but also some of the more mundane happenings. Although it’s not a replacement for heart-to-heart conversations, it’s really a great way to connect across time zones and continents!

I wouldn’t be surprised if at least one of my kids moves away when they’re adults, and I’m so thankful to be living in a time when staying in touch is easier than ever!

Do you have friends and family spread across the country or around the world? How do you stay in touch?

How to Begin a Gratitude Practice and Change Your Life

5 Ways to Protect Yourself When Getting Married

How to Layer Tank Tops