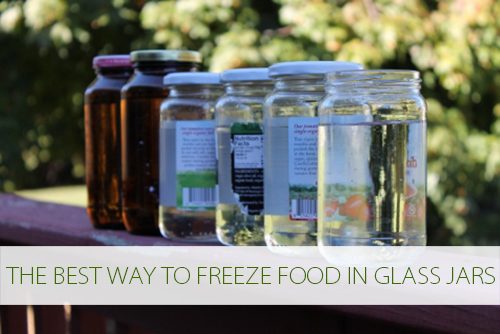 The following post is from Katie of Kitchen Stewardship: The BEST Way to Freeze Food in Glass Jars

I shared what turned out to be a pretty popular post a few years back about how to freeze in glass jars, and I have felt kind of guilty about it the past year. It felt really helpful at the time: tips on where to get repurposed jars for free, how to eye up what you have to store, and the importance of headroom.

But readers reported problems: They were still breaking glass jars in the freezer (and wasting food and shedding many tears, I tell you) at an alarming rate!

I realized that my post only skimmed the surface of what someone needed to know to successfully freeze food in glass jars, and the problems people shared in the comments over the years left me with a few questions, so I decided to set up my own science experiment at home.

Here are the questions I sought to explore:

1. Do newer freezers and/or uprights tend to break jars more readily than older and/or chest freezers?

2. Does the jar’s position in the freezer make a difference? For example, being in the door, sitting right on “quick freeze” coils, or nesting on top of other already-frozen foods.

3. Do different shapes of jars impact the breakage rate?

4. How much headroom do you really need?

5. Does freezing with the lid off solve the problem?

6. Does laying the jar down help?

Warning: Some glass jars were harmed in the writing of this post. I’m sorry. Please don’t report me to PETJ.

I filled a bunch of jars I could afford to lose with water, exactly 400 mL for the smaller tomato jars and 500 mL for the larger spaghetti sauce jars. I did some A/B testing as follows:

No breaks at all! So that taught me nothing.

Time for some serious fun.  I added 1/3 cup more water to each jar, which ended up farrrrrr more full than I’d ever risk for freezing soup or other leftovers in glass jars.

This jar was very full, really TOO full for freezing, but I still think it shows that keeping the lid off, while potentially being helpful for some to avoid broken jars, is not a perfect solution.

I also wanted to see if the “laying down” theory would hold water, ice, even in the most volatile placement in the freezer. Remember that we already successfully shattered jars with the same amount of liquid standing up in the upright freezer, even with the lid off. Now I was laying one down (which was far too full in my opinion).

Now I finally feel like I have really solid advice for freezing food in glass jars, and I don’t have to feel guilty about sharing only halfway decent tips anymore!

The Final Answer: The Secret to Freezing Food in Glass Jars without Breakage

The science behind the glass jars breaking in the freezer is that liquids expand when cold and push outward against the jar, which ultimately cracks under pressure (much like I do some days at about 5:20 p.m…).

Some breakage can happen as well because of rapid changes in temperature. We can use that knowledge of science and my experiments to create rules for freezing food in glass jars.

1. Of course, always leave an inch or so of headspace, more in bigger jars and less necessary in smaller jars.

3. Choose your jars wisely – it turns out that jars with a “shoulder” are more prone to break (like narrow-mouthed Mason jars) because the top layer freezes first, and then the solid food begins to be pushed upward toward the mouth of the jar in a shape that will not fit past the “shoulder” area. If you have a jar with a shoulder, treat the shoulder as the top when figuring headspace (or lay it down).

4. Very cold and very efficient freezers are more prone to break jars because they freeze faster. Whenever possible, freeze your glass jars either in the door of an upright freezer or the top of a chest freezer.

5. Some find that leaving the lid off your jar can help avoid breakage, but if you overfill the jars, they’re still going to break.

Even with all those strategies, and even when allowing for many inches of headspace, some readers still had trouble with glass jars breaking. One theory is that, particularly with quick-freezing appliances, that top layer of liquid/food freezes solid like a pond. Then the remaining liquid below exerts too much outward pressure on the sides of the jar, causing breaks.

The solution, and my official I’m-a-foodie-science-geek recommendation?

The increased surface area, reduction of pressure on any “shoulder” area, and the fact that laying down even expands the headroom create a triple line of defense against even the fastest freezing, uber coldest freezer.

Ah, now my work to protect your homemade stocks, soups, and other goodies from freezer-crack-itis is accomplished. I can return to my regular duties of scaring the wits out of you with research on why everything in the world is going to hurt your family.

How many glass jars would you guess you have broken in the freezer?

What to Do with Your Stuff After Decluttering